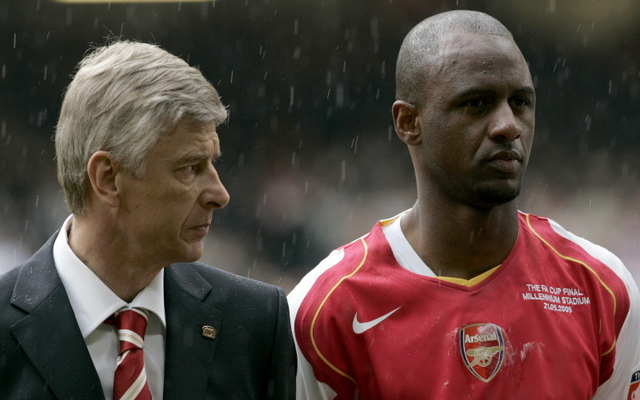 Former Arsenal midfielder Patrick Vieira has offered his support to Arsene Wenger by insisting that the players must take responsibility too.

The French tactician has again come under fire in recent weeks, with protests from supporters gathering pace to push him out of the door at the end of the season.

Having been eliminated 10-2 on aggregate at the hands of Bayern Munich in the Champions League, coupled with the fact that they’re now out of the top four in the Premier League, this season is now at risk of being a complete disaster.

With his contract set to expire at the end of the season, it remains to be seen if Wenger decides to walk away or not, but Vieira believes that others must step up and take the blame too as the players certainly haven’t helped their manager with what he perceives as a lack of fight.

“He is going through a really difficult period but at the same time I know Arsene and he is not the kind of person who will throw the towel in and walk out of this situation,” he told Omnisport, as reported by Sky Sports.

“You can work the whole week in how you want to play but when [the] players [are] on the field they are the ones who have to fight and if you don’t do it then it is a problem.

Vieira enjoyed a highly successful spell in north London under Wenger, but having failed to land a role at Arsenal following his retirement there’s a sense that the relationship has diminished.

As New York City FC coach, perhaps there’s an element of managerial support from Vieira now, but ultimately he spoke with great respect for Wenger and refused to state whether this summer was the right time for him to go as only his former boss can make that call.