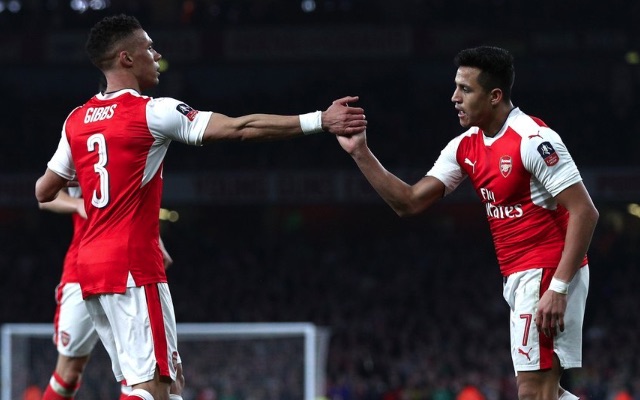 Arsenal booked their place at Wembley Stadium as they progressed to the semi-finals of the 2017 FA Cup by beating non-League Lincoln City 5-0 on Saturday night.

Despite there being 88 places between the sides in the English football pyramid, Arsenal and Lincoln were well-matched in the first 45 minutes.

However, Arsenal were able to break the deadlock in first-half stoppage time when Kieran Gibbs set up Theo Walcott, who slotted home for 17th goal of the season.

It was one-way traffic after the interval. Olivier Giroud had been a spectator in the first period, making just 14 touches, but he made it 2-0 on 53 minutes with a simple finish after good work between Hector Bellerin and Alexis Sanchez.

The goal flood continued as Luke Waterfall deflected in a Gibbs cross for an OG just before the hour.

Substitute Mesut Ozil, who came on early after Alex Oxlade-Chamberlain pulled his hamstring, set up Alexis for number four, before Aaron Ramsey completed the rout.

Fellow sub Lucas Perez embarrassed himself late on as he shamelessly dived in an attempt to win a penalty. He was lucky not to be booked.

Arsenal did have two players pickup yellow cards, as Laurent Koscielny and Granit Xhaka were cautioned, with the latter extending his awful run of bad discipline.