Chelsea and Man Utd have reportedly fallen behind Bayern Munich in the race to sign James Rodriguez, as Carlo Ancelotti wants a reunion with the Colombian ace.

In what seems like one of the longest running transfer sagas, Rodriguez’s lack of regular first-team football at Real Madrid has raised question marks over his future at the Bernabeu.

Having fallen down the pecking order under Zinedine Zidane, he’s managed just 23 appearances in all competitions so far this season, scoring five goals and providing 12 assists.

The 25-year-old enjoyed a more prominent role under Ancelotti during the Italian’s spell in charge in the Spanish capital, and as reported by The Sun, it looks as though he’ll seek a second stint working with Rodriguez who Madrid bought for £65m in 2014.

It comes from an initial report on the frontpage of Marca on Saturday, and it looks as though Bayern could now be at the front of the queue for the Colombian playmaker with Chelsea and Manchester United both credited with an interest. 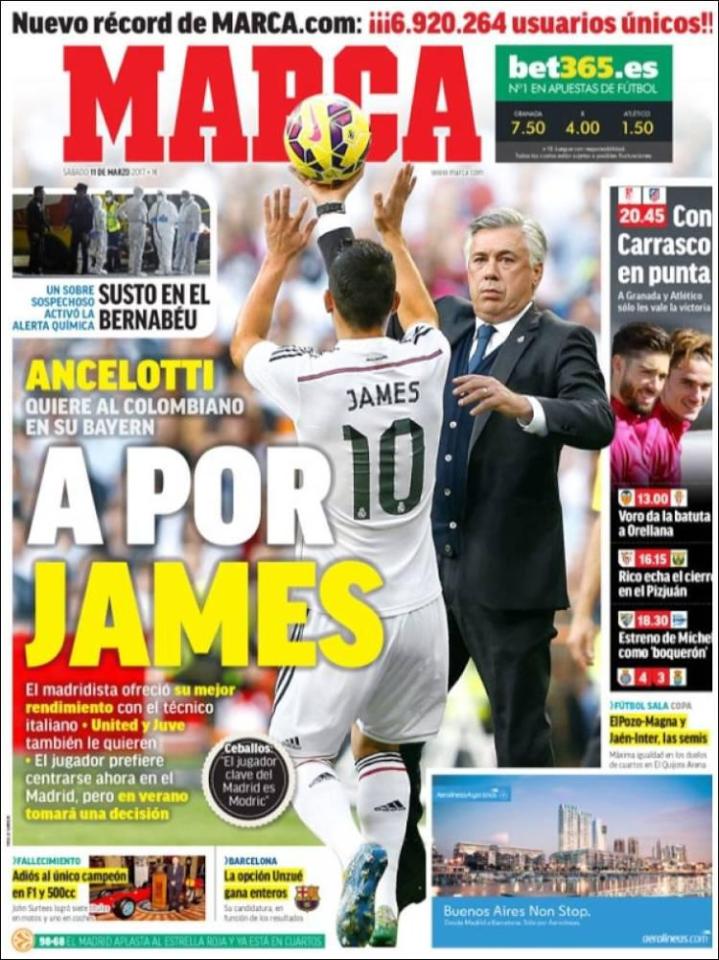 It’s claimed by The Sun that Jose Mourinho will still be confident in United’s ability to sign Rodriguez, as they share a common denominator in agent Jorge Mendes who he will hope can persuade his client to move to Manchester instead.

Meanwhile, with Chelsea on course to win the Premier League this season which in turn will result in a return to the Champions League, Antonio Conte will remain hopeful that he can prise the former Monaco and Porto star to Stamford Bridge to bolster his squad.

It sets up a fascinating three-way battle for Rodriguez, and it also serves as further proof as to how highly he is still valued and regarded despite his troubles in more recent times in Spain.