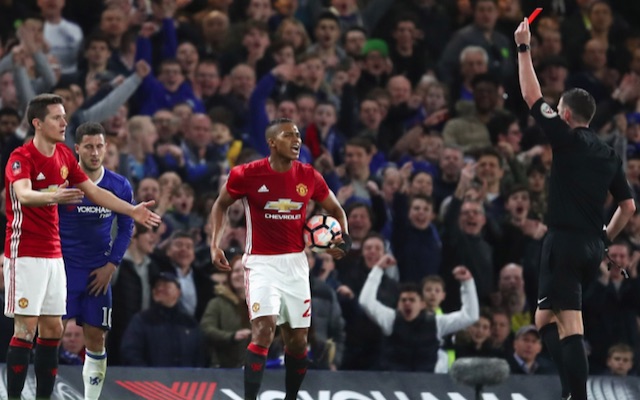 And their task was made even tougher after 35 minutes when Ander Herrera was sent off by referee Michael Oliver.

Herrera’s crimes were perhaps minor as he picked up two yellow cards for fouls on Eden Hazard.

However, the Spanish midfielder was guilty of stupidity.

United had clearly decided that fouling Hazard was their best hope of stopping him.

But after the Belgian winger won his third foul of the evening when he was brought down by Phil Jones, ref Oliver stepped in to warn the Red Devils that enough was enough.

Neither of Herrera’s yellow cards came as the result of an awful challenge, but both can easily be justified as fair bookings.

One could argue that Herrera deserved his dismissal for arrogantly ignoring the ref’s warning and stubborning continuing with United’s bullying tactics against Hazard.

Herrera certainly did not accept his punishment gracefully, though, instead he got angry and shouted abuse of Mr Oliver for daring to do his job.

At least Jose Mourinho has a decent excuse for United extending their winless run vs Chelsea to 12 games.

Mourinho loving life as Herrera red means:
a) He has a perfect excuse for his press conference
b) He can bring on Fellaini & park the bus? pic.twitter.com/4E5Msmmlyx