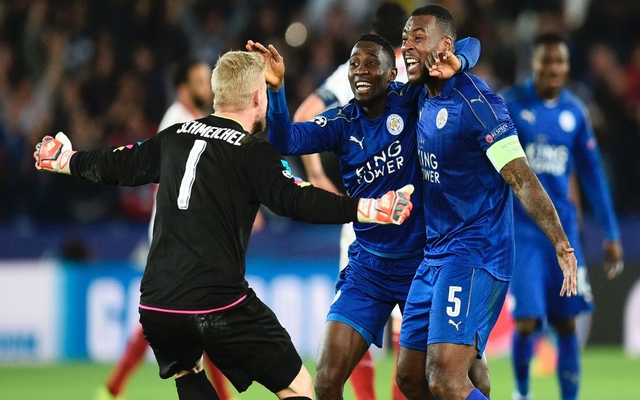 The race to finish in the top four in the Premier League this season is hotting up, with Arsenal, Man Utd, Man City, Liverpool and Tottenham effectively fighting it out over three places.

Chelsea are widely expected to finish top of the pile as they continue to boast a 10-point lead at the top of the table, while the pressure is on Arsenal and United as they are five and six points off the pace respectively, albeit with two games in hand on fourth-placed Liverpool.

However, there is a new threat to all those clubs involved in the race courtesy of Leicester City. The reigning Premier League champions shocked many by getting out of their Champions League group let alone dumping Sevilla out on Tuesday night to reach the quarter-finals.

As they march on, the Foxes have caused panic amongst rival supporters as if they were to go on and do the unthinkable by winning Europe’s premier competition, whoever finishes in fourth place in England would be relegated down to the Europa League.

The top three would advance to the CL along with Leicester, while United of course have the chance to make it by winning the Europa League this season too.

It’s a nightmare scenario for the top English clubs, but in truth with heavyweights such as Juventus, Bayern Munich, Barcelona and Real Madrid still in the competition, how many people give Leicester a chance of winning it?

It can’t be ruled out as the same thing was said last year before they won the title, and so in turn queue the panicked reaction from certain supporters as the reality that fourth place might not be enough sets in…

Gonna be lit when Leicester win the CL, and United win the EL and all of a sudden a team fails by finishing fourth.

Just know that if somehow Arsenal magically finish fourth, Leicester are gonna go win the champions league and kick us out

The scenes when Leicester win the UCL & take the fourth place from Manchester Utd…..

What price Leicester to win the Champions League and relegate fourth-placed Arsenal into the Europa?

Spurs will finish fourth as Leicester wins the Champions League, I can already see this coming