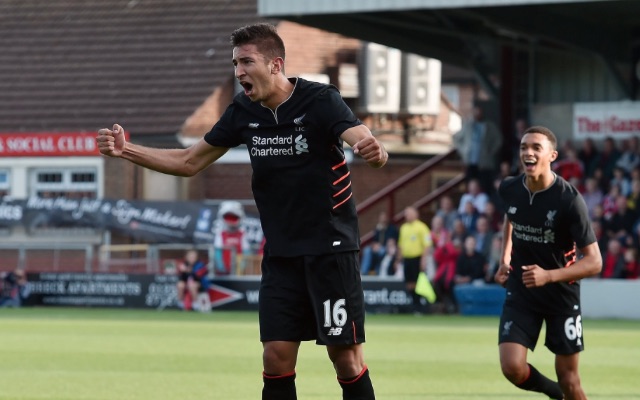 Liverpool midfielder Marko Grujic is reportedly set to secure a loan move to Dinamo Zagreb for the rest of the season in an attempt to save his Reds future.

The 20-year-old has struggled with injuries and competition for places this season, and in turn has been restricted to just five appearances in all competitions for the senior side, with no Premier League starts to his name.

In turn, a temporary move elsewhere to regain his full fitness, form and confidence could be the ideal scenario for the next three months or so, and Dinamo are willing to offer him that opportunity.

“I wanted to bring Andrija Zivkovic in from Benfica for €5million, but I failed,” adviser Zdravko Mamic told Blic.

“Now I want to get Marko Grujic from Liverpool on loan.”

Grujic featured for Liverpool Under 23s on Monday night in a 2-0 win over Chelsea, but in order to really prepare him for a more prominent role in Klopp’s side moving forward, perhaps regular first-team football at senior level elsewhere will stand him in better stead for the future.

Meanwhile, as noted by The Daily Mail, Liverpool were linked with a move for Dinamo youngster Ante Coric last summer, with Klopp keen on signing him since he was in charge at Borussia Dortmund.

While it isn’t explicitly suggested in the report, it could be an avenue for the German tactician to revisit his interest in the 19-year-old as Liverpool build solid relations with Dinamo through the Grujic move.

Whether that comes to fruition remains to be seen, but ultimately the decision to send the Serbian midfielder out on loan is a sensible start, and time will tell if he can return to Anfield and make a success of his stint in England.

Liverpool star confident of finally being cleared for transfer away Jun 14 2021, 8:19
Liverpool FC