Man Utd are reportedly ready to meet Barcelona star Neymar’s €200m release clause, and will offer him eye-watering wages to complete a move to Old Trafford.

The 25-year-old has been a decisive figure for Barca since joining the club from Santos in 2013, and he has already collected two La Liga titles and a Champions League trophy amongst other pieces of silverware in that time.

With 14 goals and 23 assists in 35 appearances in all competitions so far this season, the Brazilian international continues to play a pivotal role in the success of the Catalan giants, but it appears as though they will come under intense pressure this summer to keep him.

As seen on the front page of Spanish newspaper Sport on Monday below, it’s claimed that United are ready to splash out a sensational fee of €200m to meet Neymar’s release clause in his current contract, while they will also offer him €25m-a-year to make him the highest earner in the Premier League.

It’s added in the report that Jose Mourinho is pushing the Red Devils to move for Neymar, as he is ready to do all he can to persuade the Brazilian forward to move to England.

There is of course an angle of the argument whereby it’s suggested that a move away from Barca would allow Neymar to fully express himself rather than be one part of a prolific three-man attacking lineup with the same old claim that he is in Lionel Messi’s shadow at the Nou Camp.

In turn, this would give him the opportunity to be the primary face of a club, although Sport add that Chelsea would also be keen to hold talks with Neymar but remain behind United in the race to sign him.

This promises to develop into a highly intriguing situation this summer, but it remains to be seen if Neymar will be ready to leave Barcelona. 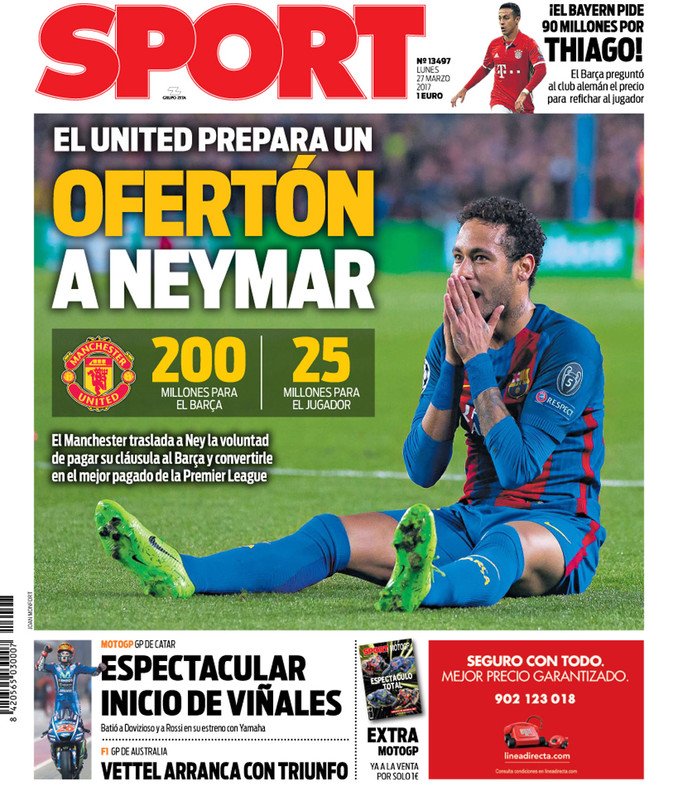