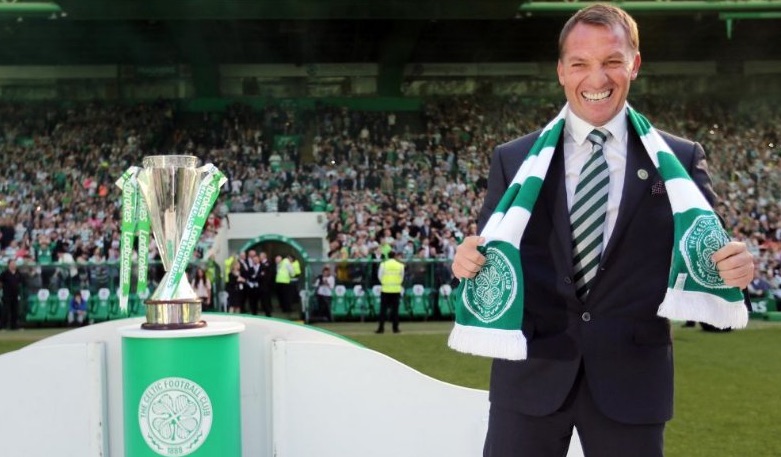 It has been a big weekend for Brendan Rodgers.

A day after being named as a possible future Arsenal boss by Gunners legend Charlie Nicholas, the Celtic chief secured the first major title of his managerial career.

Celtic won 5-0 at Hearts on Sunday to move 25 points clear at the top of the Scottish Premiership with just eight rounds of fixtures left to play.

Celtic have now been champions of Scotland six years in a row, but this was the first achieved under Rodgers.

And if Celtic win six of their last eight games, it will be the club’s best ever league season.

Their current highest ever points total was 103, achieved in 2002, but, with 86 points already in the bank, the Hoops are well on course to break that record.

Rodgers has done a fine job at Celtic Park and that has seen him linked with a potential move to Arsenal.

Speaking to Sky Sports on Saturday, former Scotland forward Nicholas – who won trophies with Celtic and Arsenal during his playing days – suggested that Rodgers will be in the mix when the Gunners look to replace Arsene Wenger.

Nicholas said: “Compliments to the players but Brendan has been absolutely fabulous. He’s been different class.

“He’s on a decent salary and he’s deserved it and merited it, but absolutely, if Arsenal are looking at a list of names to replace Arsene, Rodgers would be on it.

“He plays the Arsenal way. He played the same style at Liverpool and he probably should have won the league. Everything is there for me to say absolutely.”