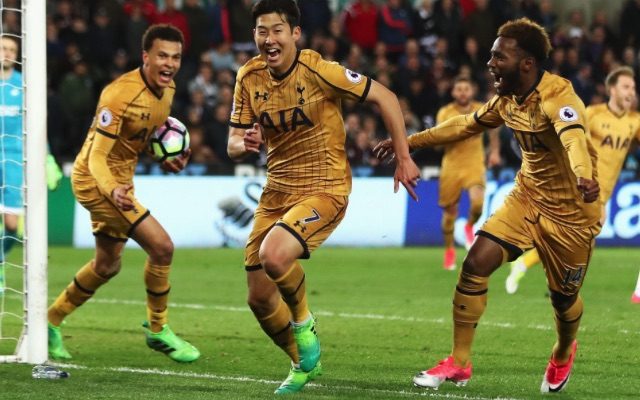 Tottenham Hotspur’s character was questioned last season as they fell away late in the campaign and famously finished ‘third in a two-horse race’.

And, although it still looks unlikely that they will win the Premier League this season because Chelsea remain seven points clear with eight games left, Spurs answered their critics last night.

Nobody can question Tottenham’s character this term.

Spurs have won more points from losing positions than any other side. And they picked up three in South Wales, after scoring on 88, 91 and 94 minutes to turn a 1-0 defeat to Swansea City into a 3-1 win.

The rest of the contest was a largely open affair, with Spurs looking the more aggressive.

And Spurs held their nerve late on, while Swansea tired.

Spurs also made better subs, brining on Vincent Janssen for the disappointing Moussa Sissoko on 61 minutes and later replacing Davies with the more attacking Georges-Kevin Nkoudou on the left flank.

Janssen was involved in Tottenham’s second goal, as he set-up Son Heung-Min with a cultured flick, after the lively Dele Alli had equalised.

Christian Eriksen then put the result beyond doubt with a composed solo goal scored from the edge of the penalty area.

Lukas Fabianski deserves a mention. The Swansea goalkeeper made save after save before Tottenham finally broke through.