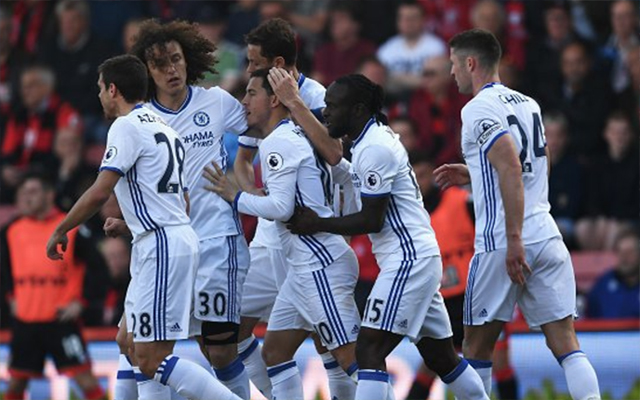 Chelsea restored their seven point lead at the top of the Premier League by defeating Bournemouth 2-1.

Chelsea took the lead early on thanks to an own goal from Adam Smith. After a smart turn, Diego Costa sliced his shot away from goal, but was fortunate enough to see it deflect off of Smith and into the back of the net. You can see the Premier League leaders’ opener here.

Soon after, Eden Hazard added a second. N’Golo Kante, who is a shoo-in for the end of season awards after a stellar debut season with the Blues, played a pin-point over-the-top pass into Hazard’s feet. He raced towards goal, rounded Artur Boruc and calmly slotted the ball home. Hazard has now equalled his best ever single-season Premier League goal haul after bagging his 14th of the season – he has seven games remaining to better it. Click here to see his goal.

It looked as though Chelsea were running away with the three points, but Josh King had other ideas. He found himself isolated in the attacking third and decided to have a go at goal. His shot cannoned off of David Luiz and looped over Thibaut Courtois to halve Chelsea’s lead. You can see King’s goal here.

Marcos Alonso then sealed the victory with a goal to remember. The Spaniard pushed David Luiz aside and stepped up to take a free-kick 25-yards from goal. He curled the ball over the wall and into the top corner to restore his side’s two-goal lead. It’s certainly worth a watch, click here to see it.

Chelsea are not far away now from being crowned champions of England for the fifth time. Next up is a trip to Old Trafford to face former boss Jose Mourinho and Manchester United. Here are our player ratings for both sides: