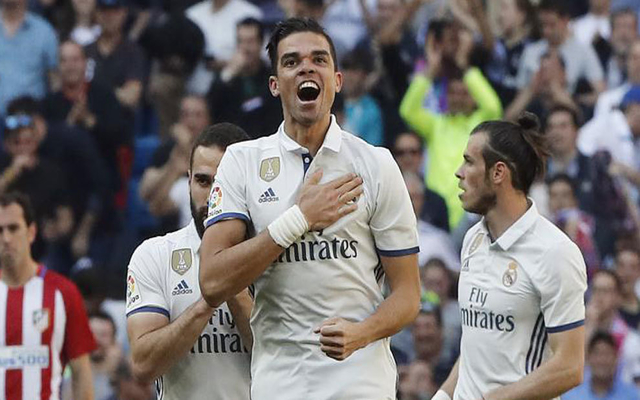 Chelsea are reportedly hopeful of convincing Real Madrid defender Pepe to make the move to London this summer when his contract expires.

The 34-year-old has been at the Bernabeu since joining the club from Porto in 2007, and he provided a timely reminder of his qualities by scoring in the 1-1 draw with Atletico Madrid at the weekend.

While the Portuguese international seemingly wants to renew with the Spanish giants, it’s been claimed by Marca that Chelsea are monitoring his situation closely with a view of swooping for him this summer.

Having shown that he is still capable of performing at a high level, albeit after also suffering two fractured ribs which will now sideline him, it has put the pressure on Madrid to make a decision.

It’s claimed in the report that the club prefer to offer him a one-year deal while he is chasing two years, and with Chelsea, Paris Saint-Germain and offers from China potentially on the table at the end of the season, a difficult decision is going to have to be made.

Time will tell if the weekend was merely a fond farewell appearance or enough to convince the Madrid hierarchy that he deserves a longer contract, but with Antonio Conte looking for defensive reinforcements the experienced Portuguese ace could be the man to fill the void on a short-term basis.

Speaking to AS, Pepe said: “Only God knows where my future lies.

“Until June 30 I am under contract at Real Madrid, isn’t that right ‘presi’ [signals to club president Florentino Perez]? As I’ve said before, I will wait for Madrid until the last second, and I will make sacrifices every day to be able to stay here”.

While he wouldn’t command a starting role on a regular basis, the fact that he has won everything there is to win at club level and has vast experience at the top level, Pepe would be a strong addition for any side.