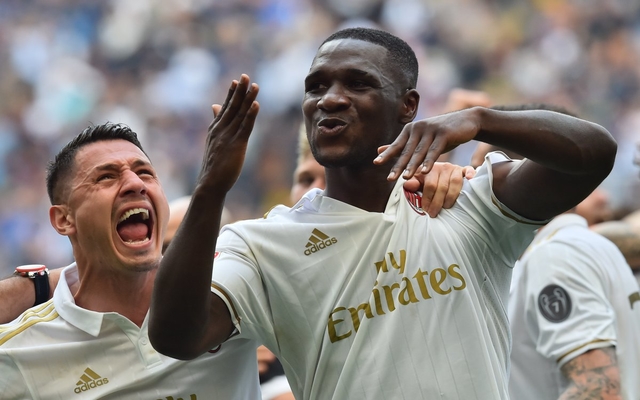 AC Milan scored a last-gasp equaliser in the derby with Inter at the San Siro on Saturday, with Cristian Zapata scoring in the seventh minute of injury time.

It was a lively game from the off as the Rossoneri created some early chances but were unable to find the back of the net and they would later rue those missed opportunities.

Juraj Kucka thought he had a shout for a penalty but was denied, before Antonio Candreva gave the Nerazzurri the lead. It looked as though Inter were on course to secure all three points when Mauro Icardi made it 2-0 just before half-time, but there was to be more drama.

Stefano Pioli’s side looked comfortable heading into the latter stages of the game as they defended well and looked threatening on the counter attack.

However, Alessio Romagnoli’s goal gave the ‘away side’ hope with just seven minutes remaining in the game although it looked as though new owner Yonghong Li and the Rossoneri faithful would be left disappointed.

There was yet more drama on the way though as with the last touch of the game in the seventh minute of added on time, Cristian Zapata forced the ball over the line from a Suso corner to send the Milan faithful wild at the San Siro.

Given Ivan Perisic broke Milan hearts in the reverse fixture with a late equaliser, the red and black half of the city got their revenge as they remain in sixth place and two points ahead of their city rivals.

Meanwhile, the result moves them temporarily a point behind Atalanta and two points adrift of Lazio in fourth as the race for the Europa League qualification spots continues to heat up.