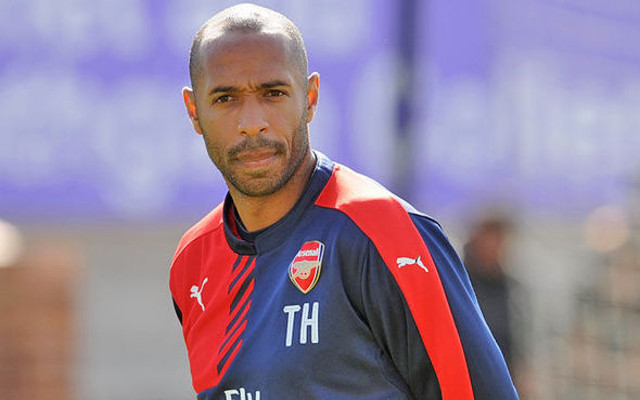 Former Arsenal forward Thierry Henry is reportedly wanted back at the club by Josh Kroenke, son of majority shareholder Stan.

However, his grand plans to bring back the Gunners legend is seemingly going to fail to come to fruition, as Arsene Wenger is said to have stepped in to prevent his compatriot from coming back to join the coaching staff.

According to The Mirror, Kroenke Jr believes that Henry’s return to the Emirates would give everyone at the club a major morale boost in the midst of what has been a turbulent campaign.

It’s claimed that he has been approached by the board over a role despite his commitments to the Belgian national team, while Sky Sports are said to be ready to allow him to take the job if he wants it.

Nevertheless, it looks as though the plan will fail as Wenger isn’t keen on the idea, as per the report, something that has held Henry back from making real progress at Arsenal in a coaching capacity since he hung up his boots.

After leaving the club previously under the same circumstances, the Mirror note that he was blocked from taking the Under-18s coaching position, as although he offered to work for free alongside his Sky Sports commitments, Wenger wasn’t satisfied with the split responsibilities.

Further, it’s been suggested that the veteran tactician sees Henry as a threat to his position in north London, and so therefore he wouldn’t want to see him in a prominent role at Arsenal.

All in all, it doesn’t look as though Henry will return while Wenger is still at the helm, which will come as a major disappointment to supporters who have also seen another club legend in Patrick Vieira seemingly forced to go elsewhere to continue his coaching journey.

However, with just months remaining on his contract with Arsenal, a possible Wenger exit could open the door for those two or others to return, but many still have their reservations over whether or not the end of his 20-year reign is coming sooner rather than later.