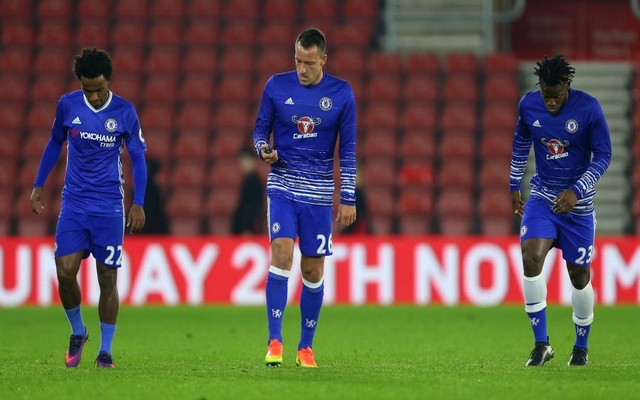 Chelsea confirmed on Monday that captain John Terry will leave the club at the end of the season, and the timing has raised some question marks for Sky Sports pair Gary Neville and Jamie Carragher.

With 713 appearances and 22 years under his belt at Stamford Bridge, the 36-year-old has firmly secured his place as a club legend.

However, with his current deal expiring this summer, it has been confirmed that he will not be signing a new deal and with a desire to continue playing, he will now search for a new challenge.

Neville and Carragher aren’t quite convinced that the timing of the announcement was right though, particularly with Chelsea now in a real Premier League title battle a day after they fell to defeat at Manchester United to give Tottenham further hope.

“The news of Terry leaving is incredibly strange timing, I don’t get it at all,” Neville told MNF.

“I’m not really sure who it suits, maybe John Terry a little bit, but I’m not even sure about that.

“It may be a distraction for the dressing room, the club and the fans will be sad today especially after the big game they lost yesterday. Maybe he’s signed a pre-agreement with somebody and they couldn’t keep it quiet any longer.”

Neville went on to insist that a player like Terry could be very useful to Antonio Conte at this stage of the season, as nerves and tension may well start to creep into the team’s displays and his experience could be vital.

However, having only played a bit-part role for the Italian so far this season, it’s unlikely that that will change at this point and so it remains to be seen whether or not Terry gets a perfect send off.

Carragher concurred with his fellow pundit as he agreed that the timing was strange, but he paid tribute to the former England international and hopes that he will join another Premier League side so they can continue to closely watch him in the latter stages of his career.