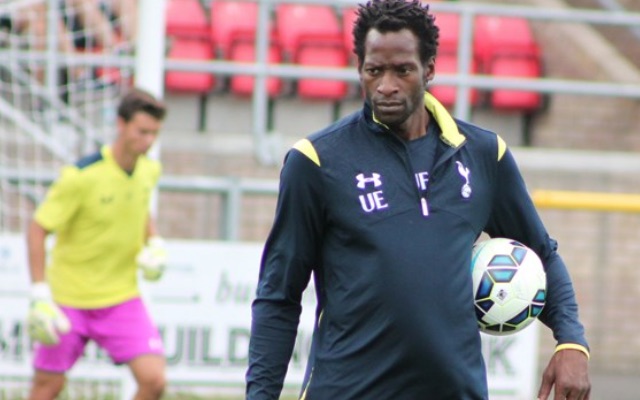 Tottenham have released an official statement to announce the sad passing of Under-23 coach Ugo Ehiogu.

The 44-year-old was taken to hospital yesterday after collapsing at the club’s training centre after suffering a cardiac arrest, as he received treatment before being transferred to hospital.

However, he sadly passed away in ‘the early hours of the morning’ as per the statement from Tottenham, and tributes have been pouring in for the former Aston Villa and Middlesbrough defender.

Ehiogu made over 200 appearances for Villa between 1991 and 2000, while he spent seven years at Middlesbrough as he won the League Cup with both clubs while also being capped by England four times.

He also played for West Brom, Leeds, Rangers and Sheffield United before hanging his boots up in 2009, and had been at Spurs since 2014.

It will come as a huge shock to all, while the club have sent their deepest condolences to his family, with his wife Gemma asking for privacy at what is undoubtedly a difficult time for them.

Tributes and respects have been paid on Twitter, with former teammate Stan Collymore and supporters of all clubs expressing their shock and sadness over the news.

It is with immense sadness that we announce the passing of Ugo Ehiogu, our Under-23 coach. pic.twitter.com/sSU0yqVfyk

Only spoke to Ugo a month ago.

Be in a happy place big man, will never forget you pal.

One of the good guys.

We are deeply saddened to hear of the death of our former defender Ugo Ehiogu.

Our thoughts are with his family at this terribly sad time. pic.twitter.com/nTk1WBhr1H

@SpursOfficial The sincere sympathy and condolences of everyone at Motherwell FC go to Ugo's family, friends and all at Spurs at this very sad time. RIP.

@SpursOfficial Thoughts with his family and all at the club at this tragic time.

@SpursOfficial This is so sad. I used to love watching him at villa park back in the day #ugoehiogu RIP big man

This is truly shocking, seemed like a genuine great guy with bright future in coaching, condolences to his family! Enjoy life people! https://t.co/3OgIKw3iuT