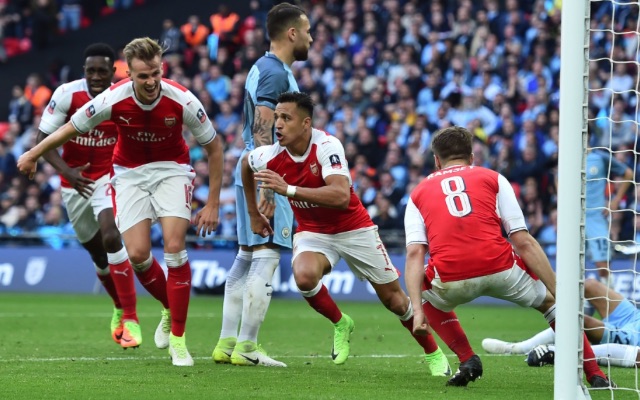 Alexis Sanchez bagged the winner in the 101st minute to book a date with Chelsea on May 27.

The Chilean fired home from close range after City made a mess of clearing a Mesut Ozil free kick.

I hope this wins it !! pic.twitter.com/mOI2RybNjl

That came after a rare Nacho Monreal strike had cancelled out a goal from Sergio Aguero in the second half of normal time.

City dominated the battle, in terms of possession and shots.

Arsenal registered just four attempts on target, compared to City’s 12, while the Manchester side had 65.5% of the ball during the two-hour contest.

However, Petr Cech put in a strong performance to keep City’s strikers at bay.

Luck was on Arsenal’s side too though, as Aguero had a perfectly good goal disallowed in the first half after the linesman wrongly judged that the ball had gone out of play.

Aguero did get on the scoresheet eventually, breaking the deadlock just after the hour with a fine dink over Cech, following a long through pass from Yaya Toure.

Monreal = Me
Aguero = My hopes and dreams pic.twitter.com/l9v3uyKk4o

Left-back Monreal was the man who made it 1-1, finding the net with his weaker right foot to score his first Arsenal goal since March 2015.

Both teams got edgy in extra time and the winner was suitably scrappy.