After Nemanja Matic’s wonderstrike against Spurs at Wembley on Saturday, we remember five of the FA Cup’s greatest goals.

And, to the dismay of West Ham fans everywhere, Steven Gerrard produced one.

The Liverpool legend swung his leg at a bouncing headed clearance, sending a thunderbolt on the half-volley, from 30 yards, arrowing into the bottom corner of Shaka Hislop’s net.

Ray Parlour’s effort in the 2002 final is possibly more famous for Tim Lovejoy’s commentary than the actual strike.

With the Romford Pele driving towards the Chelsea goal, Lovejoy turned to Bradley Walsh on Sky Sport’s Fanzone and said: “It’s only Ray Parlour”.

He soon regretted it, as Parlour moved the ball onto his right foot and sent a curling effort into the top corner, grazing the fingertips of Carlo Cudicini before hitting the back of the net.

Paul Gascoigne got Spurs off to a flying start in the first ever FA Cup semi-final between the North London rivals.

After just five minutes, Spurs were awarded a free-kick in a central area about 30 yards from goal.

Gazza stepped up and smashed his effort straight into the top right corner of the goal, leaving poor old David Seaman stranded.

With the1999 semi-final replay heading towards penalties, Ryan Giggs turned on beast mode and won the tie for United single-handedly.

Latching on to a stray pass, Giggs ran from his own half into the Arsenal box, leaving the entire defence in his wake, before firing a rocket from close range into the roof of David Seaman’s net.

The celebration was equally iconic, with Giggs sprinting down the line, swinging his shirt above his head, showing off the beautiful game’s most famous hairy chest.

If you’re ever wondering what the perfect start to an FA Cup final would be, look no further.

With less than a minute gone of the 1997 showpiece, Roberto Di Matteo strode from his own half deep into Middlesbrough territory.

Totally unchallenged, the Italian let fly, sending a long range effort crashing against the cross bar and into the goal. 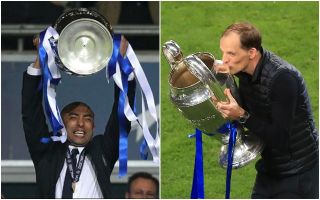