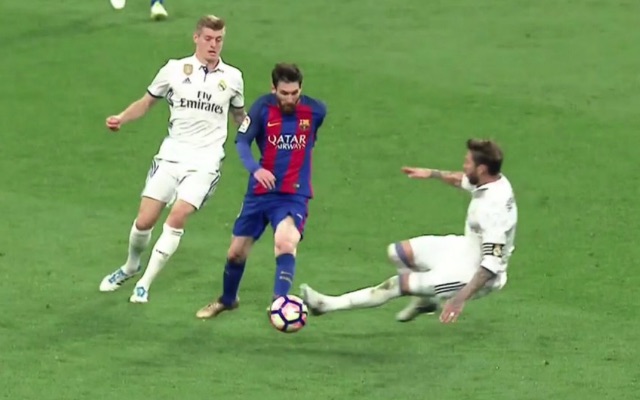 Lionel Messi scored the 500th goal of his Barcelona career on Sunday night to send his side top of La Liga thanks to a last-gasp 3-2 win over rivals Real Madrid.

Messi, who had earlier netted a fine individual equaliser to cancel out Casemiro’s opener, struck in the 93rd minute to silence the Bernabeu.

Barca and Real are now level on points, but Messi and co are top courtesy of their superior head-to-head record.

However, Real have six games left to play, while Barca only have five fixtures remaining.

Real will be disappointed to lose after they had fought back from 2-1 down with just 10 men.

Ivan Rakitic put Barca in front for the first time on the night after 77 minutes, moments before Sergio Ramos was shown a straight red card for a two-footed lunge on Messi.

Ramos should try out for the wwe with drop kicks like that #ElClásico pic.twitter.com/2V2qC3ldQu

Nine minutes after losing Ramos, James Rodriguez levelled the score and Real tried to hang on for a valuable point.

They fell agonisingly short, however, as Messi popped up in stoppage time to score one of the biggest goals of his incredible life.