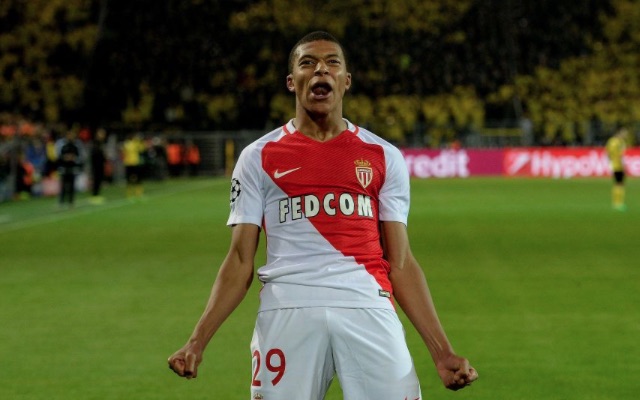 Real Madrid are reportedly set to lodge a staggering £85m bid to sign Monaco starlet Kylian Mbappe this summer, which is bad news for Man Utd and Barcelona.

The 18-year-old has become the most in-demand player in Europe given his form for the Ligue 1 outfit this season, as he’s helped them to top spot in France and the semi-finals of the Champions League.

Mbappe has bagged 23 goals and 11 assists in 37 appearances in all competitions, and he has certainly continued to prove that the hype is real which has also alerted a number of top European clubs.

According to L’Equipe, Florentino Perez is striving to deliver a marquee signing this summer and has vowed to do whatever it takes to sign the French international, which according to the report would involve a transfer fee of around £85m.

Both United and Barcelona have been linked with an interest, as noted by The Sun, and so it remains to be seen whether or not they are willing to match Madrid’s offer and have the financial power to surpass them on personal terms.

Nevertheless, Monaco will be desperate for him to focus on the remainder of this season as they go for glory on various fronts, but it will be a major loss for them to see him leave so early in his career as they continue to produce quality young players.

Mbappe would likely be an asset for any top European club and with so much room for improvement and development in his game, he will certainly have a bright future ahead. The only question that remains is where he will be to take his game to the next level and win trophies on a consistent basis.