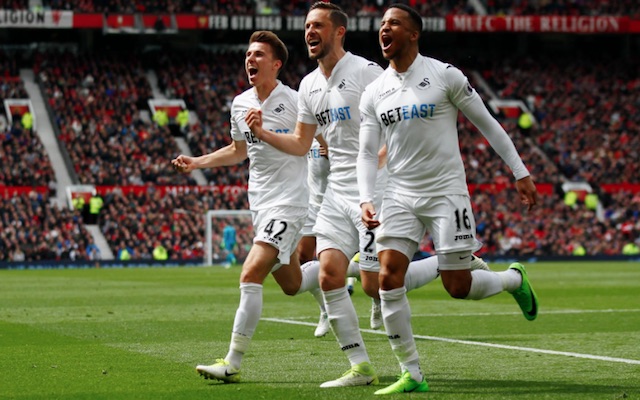 Swansea City went toe-to-toe with Manchester United at Old Trafford on Sunday and they were rewarded with a 1-1 draw.

Both teams registered 12 shots, with five each on target, and both scored from a dead ball situation.

United’s came via the boot of Wayne Rooney, after Marcus Rashford had won a controversial penalty.

Swansea’s equaliser was a much prettier goal as Gylfi Sigurdsson curled a glorious free-kick into the net.

Herrera plays for Swansea as Sigurdsson tells him to get back in the wall ?? pic.twitter.com/eWVraTzhd2

The Iceland international almost set up a last-minute winner for the Swans, again from a set-piece, but his fine cross was met tamely by Fernando Llorente, who spurned a gilt-edged chance to turn one point into three.

But the Red Devils can have no complaints about the result, having failed to assert themselves enough in either half.

Sigurdsson was the stand-out candidate for the man-of-the-match award, but Swansea defender Federico Fernandez was also impressive.

United’s best player was probably Ander Herrera, who was combative defensively and more positive in possession than most of his teammates.