It’s Monday, and that means one thing. Garth Crooks is back to wind up Premier League supporters across the land with his BBC Premier League team of the week.

Hull City duo Eldin Jakupovic and Harry Maguire kick us off after playing influential roles in their side’s goalless draw at Southampton, as they continue to claw away from the relegation zone.

Joining them is Burnley’s Stephen Ward who played an important part in their impressive win at Crystal Palace on Saturday while Chelsea duo Victor Moses and Gary Cahill complete the backline.

It’s no surprise really as the Premier League title favourites made easy work of Everton in what was supposed to be a tough afternoon for them, and keeping a clean sheet at Goodison Park, with Cahill getting on the scoresheet too, there can’t be too many arguments on that one.

In midfield, Gylfi Sigurdsson gets the nod after earning Swansea City a point at Manchester United, while Christian Eriksen and Dele Alli complete the midfield trio after inspiring Tottenham to a win in the north London derby over Arsenal.

Joshua King has been instrumental in Bournemouth securing back-to-back victories to move closer to safety, as he bagged his 15th of the season in the win over Sunderland. Joining him up front is Jamie Vardy who is back on the goal trail for Leicester City while Pedro scored a stunner at Everton as the Spaniard helped Chelsea to all three points and moved them a step closer to the title.

Perhaps there’s a couple of contentious decisions in there, but Crooks has done relatively well on the whole to select the best XI. However, some Tottenham fans didn’t see it that way as they were left unhappy with one snub in particular from their win on Sunday… 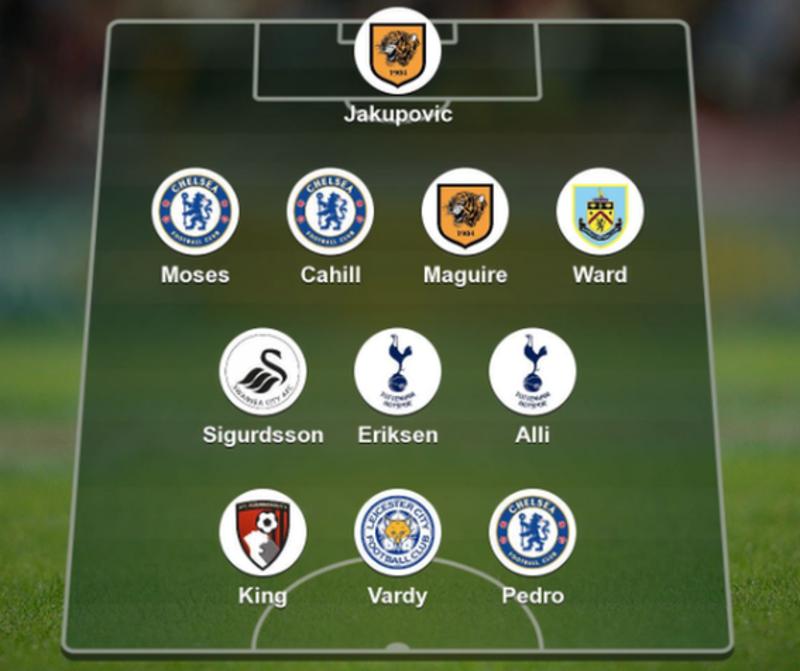 @BBCSport How can he not have Vertonghen

@BBCSport No @JanVertonghen ?? You havin a laugh??