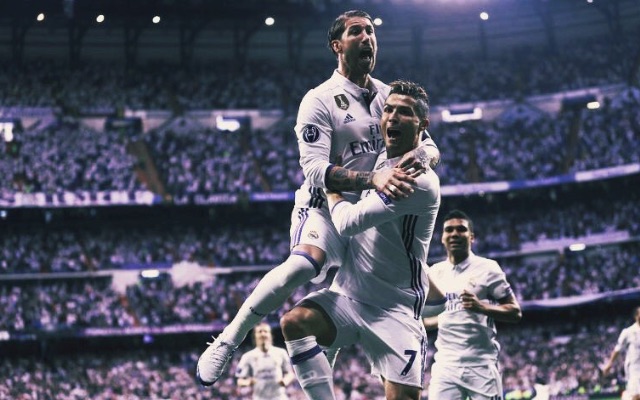 Cristiano Ronaldo scored a hat-trick for the second consecutive Champions League game to put Real Madrid in total control of their semi-final against Atletico.

The former Manchester United star scored all the goals as Real beat Atletico 3-0 at the Bernabeu in the first leg of the contest, which concludes at the Vicente Calderon stadium in eight days.

Ronaldo’s first was a trademark header on 10 minutes, set up by a cross from Casemiro.

Nobody can claim an assist for Ronaldo’s second, which was – like the evening – all about him.

The 32-year-old, who has now scored 103 career Champions League goals – three more than Atletico as a club – nearly broke the net as he rifled a powerful volley into the top corner from the edge of the penalty area.

Hat Trick #Hero
This is goal 2/3.
Ronaldo is incredible. pic.twitter.com/YJlnQqovGk

And Ronaldo completed his 42nd hat-trick for Real – yes 42! – late on with a simple finish following a Lucas Vazquez cut-back.

Ronaldo was obviously the Man of the Match.

In truth, he was the only player who stood out, so much so that one suspects the scoreline might have been reversed had he been wearing Atletico colours.

Ronaldo made life very hard for Atletico centre-back Stefan Savic, while Antoine Griezmann was quiet at the other end.

Antoine Griezmann didn't touch the ball inside the Real Madrid box tonight.
He created zero chances and had zero shots. How much??? pic.twitter.com/RuhmT0VX31

Sergio Ramos courted controversy at 1-0, ploughing his forearm into the head of Atletico right-back Lucas Hernandez, but Martin Atkinson failed to punish him with a card.

SEE ALSO: (Watch) Coward Sergio Ramos should have been send off for this sly punch during Real Madrid vs Atletico Madrid