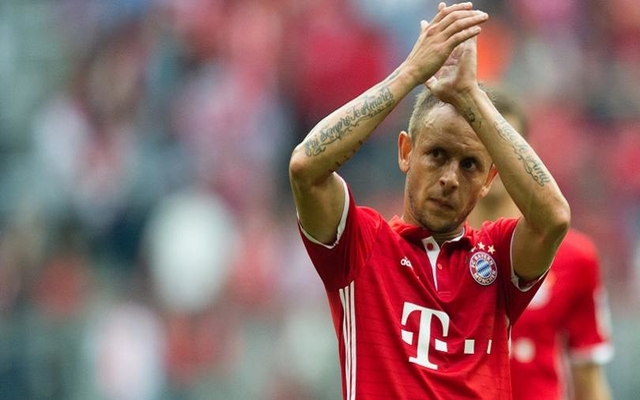 Arsenal and Liverpool target Rafinha has revealed that he would be keen on a Premier League move as his time at Bayern Munich could be drawing to a close.

With just nine Bundesliga starts to his name this season, the 31-year-old hasn’t been able to establish himself under Carlo Ancelotti, and the Italian tactician may well decide to move him on in the summer.

With his contract set to expire in just over 12 months time, Rafinha has spoken about his possible options moving forward, and it seem as though the Premier League will be high on his priority list, with FourFourTwo crediting both Arsenal and Liverpool with having an interest in the experienced defensive ace.

“I don’t like to talk about offers – I have managers for that. But it’s true, those offers are real,” he told FFT in an exclusive interview. “I have a few offers from Premier League clubs.

“I always follow the Premier League matches. It’s very exciting watching a tournament where six or seven teams can fight for the title. It’s probably the best league in the world.”

With over a 100 league appearances under his belt for both Schalke and Bayern, coupled with two caps for Brazil, it’s fair to say that the right-back would bring plenty of experience and a winning mentality to the next club that he decides to join.

Rafinha has picked up five Bundesliga titles, five other domestic pieces of silverware along with the Champions League, UEFA Super Cup and FIFA Club World Cup during his six-year stint with the Bavarian giants and so he has seen it all and been an important part of the squad.

However, with the club arguably looking in a different direction now, a move to Anfield or the Emirates might suit all parties, but time will tell if it comes to fruition.

Arsenal eyeing swoop for Barcelona ace who could be available for around £14m this summer May 28, 2020 11:03
Arsenal FC