Garth Crooks is back with his BBC Premier League team of the week, even though Chelsea have yet to play, and Man Utd starlet Axel Tuanzebe will love it.

The 19-year-old made his Premier League debut against Arsenal at the Emirates on Sunday afternoon, and even though Jose Mourinho’s side fell to defeat, the youngster made a big impression and will be hopeful that it’s just the first of many appearances in the league for the Red Devils.

Crooks was certainly impressed, as he enjoyed the fact that United are set to bring through another youth team product and Tuanzebe stepped up and delivered a mature performance.

Meanwhile, the BBC pundit also offered Liverpool some transfer advice after suggesting that Ryan Bertrand is the perfect solution to their conundrum at left-back after the England ace produced an assured display in the goalless draw at Anfield with Southampton.

Jurgen Klopp undoubtedly needs to bring in a natural left-back to replace James Milner in the team for the long-term, and perhaps Crooks actually has a point on this occasion.

Laurent Koscielny, Vincent Kompany and Alfie Mawson complete the backline after all impressed in wins for their respective sides, while Jordan Pickford was impressive again as he will surely be leaving relegated Sunderland this summer.

Manuel Lanzini gets the nod after his game-winning goal against Tottenham on Friday night, while Kevin De Bruyne, Aaron Ramsey and Riyad Mahrez sit alongside him in midfield as all three were influential this past weekend.

That leaves just one man up top, and it’s Burnley striker Sam Vokes who gets Crooks’ vote after helping his side to a 2-2 draw with West Bromwich Albion.

As is the case every week, there will be many who disagree with Crooks and question some of his snubs. However, he’s done relatively well this week and Tuanzebe will be a huge fan of his selections in particular. 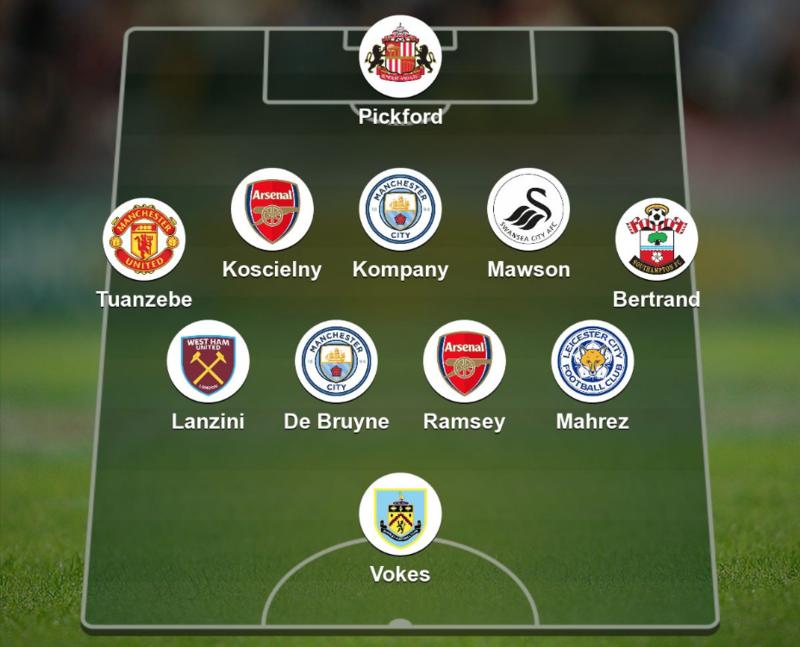