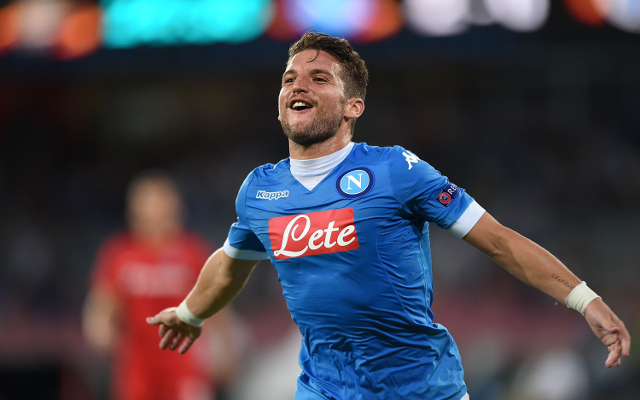 While the usual names such as Alvaro Morata and Romelu Lukaku have been bandied around for months, it appears as though Chelsea and Manchester United share another target this summer.

Both Premier League heavyweights will be looking to bolster their attacking options ahead of next season, with Chelsea possibly forced to replace Diego Costa while United are likely to bid farewell to Zlatan Ibrahimovic at the end of the campaign.

In turn, it’s probably only natural that the same names are linked with both clubs, and according to Het Laatste Nieuws, it’s suggested that Napoli forward Dries Mertens can now be added to that list.

It’s worth starting off by looking at the 30-year-old’s form this season as he has been sensational for Maurizio Sarri’s side, scoring 30 goals and providing 13 assists in 43 appearances in all competitions.

In turn, it’s no real surprise that other clubs around Europe are taking notice and start to consider a bid, although he has been heavily linked with signing a contract extension with the Partenopei as per reports in Italy this month.

Despite having four years remaining on his current deal, Napoli have been keen to reward him and fend off interest elsewhere by improving his personal terms, and it looks likely that Mertens will extend his stay in Naples rather than switch for a move to England.

Nevertheless, it’s suggested that Chelsea boss Antonio Conte sees the Belgian international fitting in perfectly with what he is looking to build at Stamford Bridge, and particularly with the return of Champions League football to their schedule next season, they will have to strengthen.

United were even said to have offered him a contract worth £4.3m-a-season, as noted by The Sun, and so while no deals have yet been signed, it remains to be seen if Chelsea or the Red Devils can prise him away from Italy this summer.