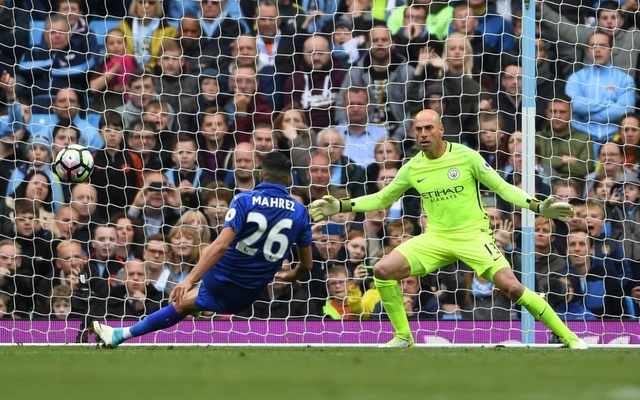 Leicester City fell to a 2-1 loss at Manchester City on Saturday, but there was a big talking point in the second half courtesy of Riyad Mahrez.

After winning a penalty for the Foxes having twisted and turned his way into the box before being brought down by Gael Clichy, Mahrez dusted himself down and stepped up to take the spot-kick.

Unfortunately for the Algerian international though, he made a complete mess of it. As he stepped up, he slipped and touched the ball twice as it went flying into the back of the net.

Mahrez' disallowed penalty… Spot on (no pun) from the ref. #MCILEI pic.twitter.com/7yHwlOnDjU

However, as per the rules, if you touch the ball twice from a penalty, it’s a free-kick to the opposition and after a furious Willy Caballero made his point, referee Bobby Madley made the right decision by ruling the goal out and giving City a free-kick.

The visitors continued to push on after that in search of an equaliser but they couldn’t find a way through as Pep Guardiola’s side secured all three points in an important win with regards to their Champions League qualification hopes.