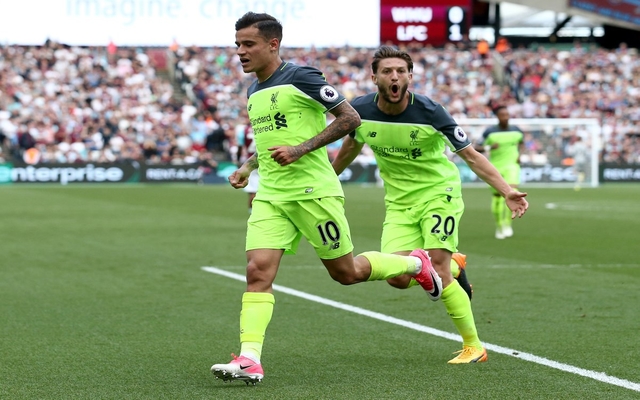 Liverpool playmaker Philippe Coutinho was in inspired form on Sunday as he bagged a crucial brace against West Ham United.

The Brazilian ace has now been involved in 19 Premier League goals this season, more than any other Liverpool player, with 12 goals and seven assists.

He couldn’t have picked a better time to get back amongst the goals though with the Reds desperate for all three points on Sunday to put themselves in a strong position to qualify for the Champions League.

After a stunning effort from Georginio Wijnaldum rattled the crossbar, Coutinho weaved his way into a dangerous position before striking a brilliant effort into the back of the net to effectively end the contest.

It wasn’t long before he was on the scoresheet again with another smart finish as West Ham were left furious over a handball call that wasn’t given as Slaven Bilic’s side started to capitulate having failed to produce another upset after their win over Tottenham last week.

As for Liverpool, they will now head into the final game of the season against Middlesbrough at Anfield with their fate in their own hands with Arsenal having to win in midweek to keep their hopes of a top-four finish alive.