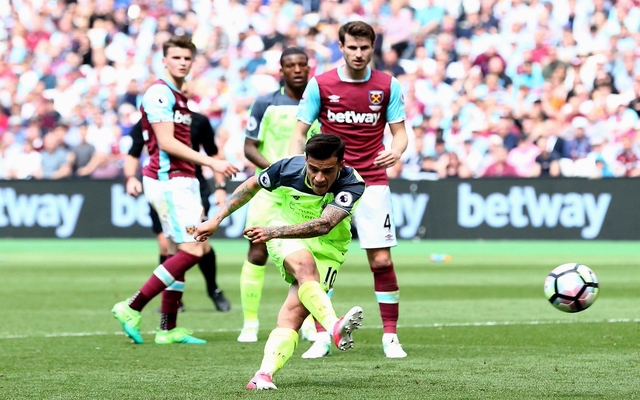 Liverpool playmaker Philippe Coutinho has welcomed transfer speculation linking him with a move to Barcelona, although he insists he remains focused on his current club right now.

The Brazilian ace was in dazzling form as he bagged a brace in Liverpool’s 4-0 win at West Ham United on Sunday, with Jurgen Klopp’s men putting one foot in the Champions League next season.

They’ll need another positive result in the final game of the season against Middlesbrough, but it looks as though they’ll be back at Europe’s top table.

However, speculation over Coutinho’s future doesn’t go away amid ongoing interest from Barcelona, and this is probably not quite what Liverpool supporters were hoping to hear from him.

“Barcelona is one of the best teams in the world, so far, nothing has come to me, because if anything comes, it comes to my manager, what I have to do is focus on the pitch,” Coutinho told ESPN Brasil.

“I have a contract with Liverpool, there are two games, there are a lot of chances for us to be in the Champions League next year. What I have to do is focus on football and those things are resolved by the business people.

“I’m happy to know that a great club has an interest, it’s cool, for the recognition of their work, what I have to do is keep working hard. Liverpool is a great club and we have to put Liverpool back in the Champions League.”

It’s not quite a ‘I’m committed to Liverpool and have no interest in moving to Barcelona’ comment that many would have been hoping for, but then again it’s still a fairly strong statement in that he’s committed to the Reds and wants to get them back into the Champions League.

However, with the summer transfer window fast approaching and with Barca likely to make big changes this summer with Luis Enrique stepping down and his successor coming in hoping to take them back up a level, Coutinho could yet form an important part of their transfer plans this summer.