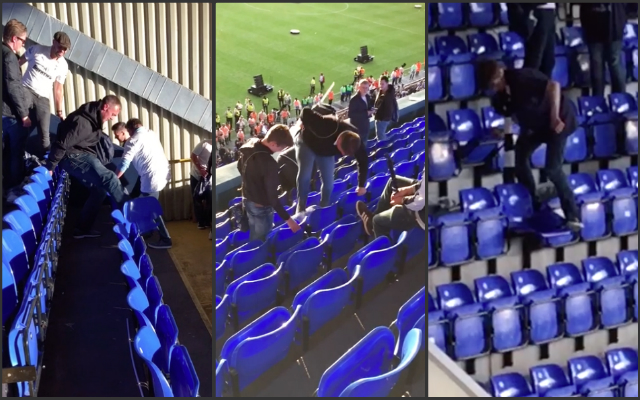 Many of us used to collect ticket stubs, before most Premier League stadiums switched to electronic entry cards.

Meanwhile, matchday programmes are still fairly popular, but they’re a bit naff these days, considering they can cost up to £10 and are basically just made up of articles copy-and-pasted from the club’s official website.

So, with decent football collectables harder to come by nowadays, footy fans sometimes need to go out of their way to get a good piece of memorabilia.

A case in point was Sunday’s game between Tottenham Hotspur and Manchester United at White Hart Lane – the final match ever to be played at the famous old stadium.

Spurs gave every home fan a bag containing a t-shirt and a flag, but that just wasn’t special enough for many supporters, who decided they’d much rather physically take a bit of White Hart Lane home with them.

Advertising boards were popular, but seats were by far the most in-demand item fans tried to steal.

Some made their thieving look easy.

But look at the 2nd bloke’s face when he realises his failed effort has been filmed??? pic.twitter.com/ysltGxbyMB

However, others hot a tough time trying to remove the plastic chairs from the stadium.

This Spurs fan *REALLY* wanted to take a White Hart Lane seat home with him after Tottenham v Man United!

If at 1st you don’t succeed…? pic.twitter.com/rlNPzmGs09