The 18-year-old has established himself as an indispensable part of the Rossoneri team over the last two years, proving his quality and maturity on countless occasions to emerge as one of the top shot-stoppers in Europe.

However, with his contract set to expire next summer, Milan are under growing pressure to get him to commit his future or they potentially run the real risk of losing him.

Agent Mino Raiola hasn’t been helpful in that regard, as per reports, and now Guardiola has gone public for the first time in discussing Donnarumma which was followed by a front page story on Gazzetta on Tuesday suggesting that, along with Manchester United, City could be in a €35m battle to sign the Italian international this summer.

“He’s a top, top goalkeeper, absolutely, he has huge quality for only 18 years of age,” he is quoted as saying by La Gazzetta dello Sport. 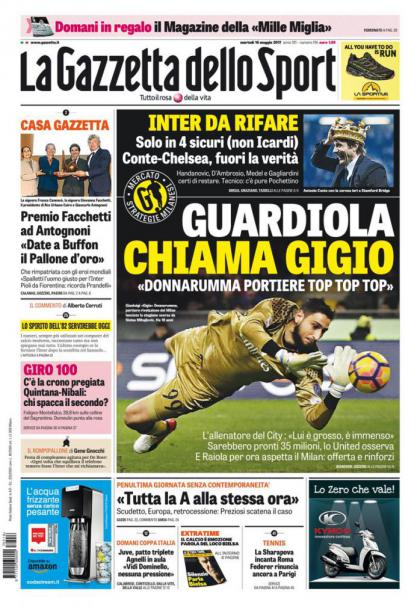 This will be a major source of concern from a Milan perspective as the new hierarchy will be under real pressure this summer to not only keep their best players but also to significantly strengthen the squad.

While the Italian giants look on course to make the Europa League qualifiers next season, following on from Yonghong Li’s takeover last month they are expected to spend big this summer in order to bolster the group and push on to become a real force in Italy and Europe over the next three to four years.

Donnarumma is a pivotal part of that plan, but unless a new contract can be agreed upon, Milan will continue to run the risk of losing him and strong interest from City and United will not help matters.

It’s no surprise Guardiola is looking at the teenager though, as with Claudio Bravo failing to impress this season, coupled with Willy Caballero’s contract running down this summer and Joe Hart unlikely to have a future at the Etihad, a goalkeeper is arguably top of the Spanish tactician’s transfer shortlist.