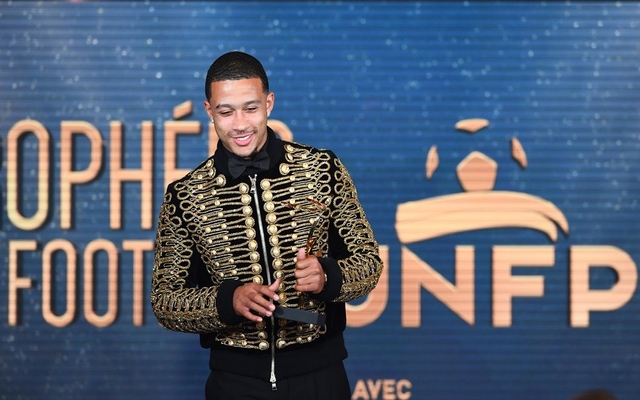 Memphis Depay collected the Ligue 1 Goal of the Year award on Monday night, but it was his fashion nightmare that caught most of the attention.

The former Manchester United ace landed the award for his stunning effort for Lyon against Toulouse as he found the back of the net from the half way line.

However, all that good work was seemingly wasted when he turned up in what has been described by many as a reject from Michael Jackson’s wardrobe. It’s worth noting that the Dutchman is a huge MJ fan by all accounts, so this was probably meant as tribute to the late singer.

Memphis Depay up for goal of the season in France because of this stunner. pic.twitter.com/25x3aaawmT

The 23-year-old has bagged five goals in 15 games for the French outfit since his move from United, as he looks to get his career back on track and start to impress for club and country again.

However, if he’s looking to secure future modelling jobs, then someone will surely have to have a word with him about this jacket.

As seen by the reaction on Twitter, it didn’t go down particularly well…

@ManUtd_HQ has anyone called Annie to see if she;s ok?

@ManUtd_HQ @Asad_133 Cares more about his clothes than his football career

@SquawkaNews Talented player, but wtf is that outfit?