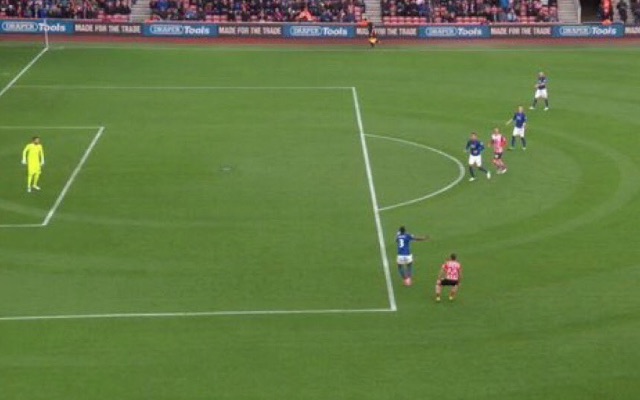 Refereeing renegade Mike Dean loves being the centre of attention and, luckily for him, he was on Wednesday night.

With Southampton and Manchester United failing to conger up much excitement organically, Dean took it upon himself to create some drama.

Dean decided to play his trump card by awarding an outrageous penalty kick against United defender Eric Bailly for hand-balling outside of the 18-yard box.

Hey @fa
I presume demotion now follows for Mike Dean
Can’t even do the basics
When linesmen doesn’t even react #mufc pic.twitter.com/y4gxQabrog

Despite the decision baffling many at the stadium and millions more at home, Dean gave it with his usual air of outstanding certainty.

The penalty itself did not result in a goal – and the game ended 0-0 – with Sergio Romero pulling off a fabulous diving save to deny Manolo Gabbiadini.

Romero was playing just his sixth domestic match of the season, after United manager Jose Mourinho decided to select him ahead of David de Gea to give him additional practice ahead of the Europa League final.

Argentine Romero has started 11 games during United’s Europa League campaign and Mourinho appears set to select him in the final out of loyalty, despite De Gea being a superior stopper.

That said, Romero is certainly on form right now…

And here is Romero’s save vs Southampton. We are watching a lookalike guys im telling you pic.twitter.com/A2psFjNwZj