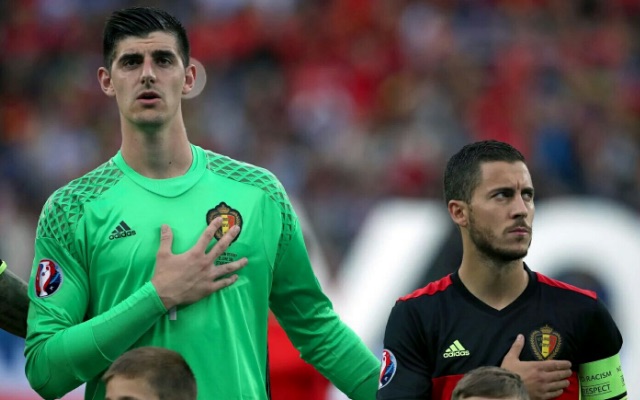 Chelsea are reportedly willing to significantly increase their wage bill in order to ensure they keep star men Eden Hazard and Thibaut Courtois at Stamford Bridge this summer.

According to The Telegraph, Chelsea bosses have opened contract talks with goalkeeper Courtois in response to Real Madrid showing interest in the 25-year-old.

The Telegraph claim the Courtois is currently on a £100,000-a-week deal until 2019, but the Blues are happy to give him new terms to strengthen their hold on one of their top assets.

Per the newspaper, Chelsea know that they will have to pay Courtois more than £150,000 to convince him to sign.

Meanwhile, The Telegraph also report that Hazard is to be offered a contract worth £300,000 per week – £15.6m annually.

Hazard has been in fabulous form for Chelsea this season, scoring 15 goals in 35 Premier League starts.

He recently gave Chelsea fans encouragement by suggesting that he might not have to leave Stamford Bridge in order to fulfil his potential.

Hazard told Sky Sports that it is possible for him to win the Ballon d’Or as a Chelsea player.

“I hope to win the Ballon d’Or one day,” he said. “It’s in my mind. If I don’t, it won’t be a problem. I try to make a good career – the best I can – but I think some other players deserve to win it also.

“When Ronaldo and Messi retire, maybe it will be another couple of players like Neymar, Paulo Dybala or Antoine Griezmann, who knows? We will see. It’s not something I think too much about.

“Could I win it? If I play next season, we win the Champions League and I win the World Cup with Belgium, why not?

“In the last 10 years, the Ballon d’Or winners play in Spain, but it’s not automatic. If a player is better in England, he will win it.”