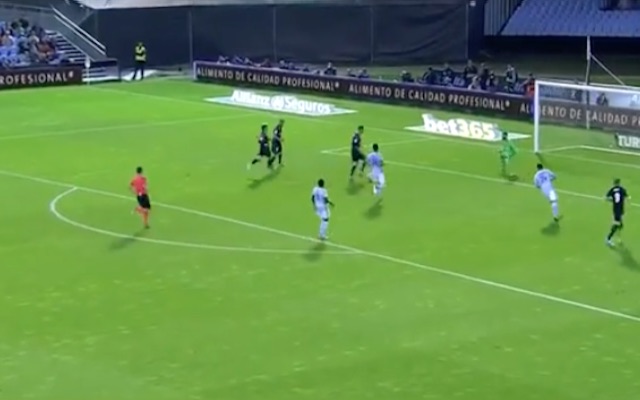 Cristiano Ronaldo is not perfect!

Sure, he is built like Adonis and has broken more records than Guinness have the resources to document, but he showed his human side on Wednesday night.

Ronaldo scored twice as Real Madrid beat Celta Vigo 4-1, but the match will not be remembered for his brace, rather this astonishing miss which saw him blow the chance to complete his hat-trick.

Cristiano Ronaldo with the miss of the season tonight ? pic.twitter.com/ASp2gOhBlG

Real’s victory saw Ronaldo and co move three points clear of Barcelona at the top of the La Liga table with just one round of fixtures left to play.

Whatever happens in Barcelona’s game at home to Eibar on Saturday, Real cannot be caught if they claim at least a point away to Malaga.

Real have only won on two of their last four trips to Malaga, both single-goal victories.

They drew 1-1 with Malaga the last time the sides met at La Rosaleda Stadium when Raul Albentosa cancelled out a Ronaldo opener.