ESPN FC have put together a Premier League XI consisting of the most disappointing individuals in the English top flight this season.

Rather than pick those who have just been terrible this year, they’ve singled out the players that had high expectations but simply haven’t lived up to them.

In that sense, they’ve done pretty well with the XI below, as there have been some real disappointments this season with Claudio Bravo certainly amongst them.

The Manchester City goalkeeper is the man between the posts after failing to offer Pep Guardiola what he thought he was getting both as a shot-stopper and a distributor from the back, while teammate John Stones joins him as he has had an indifferent first year at the Etihad and of course arrived for big money.

Matteo Darmian has struggled to get a look in under Jose Mourinho at Man Utd for the most part, while Lamine Kone completes the back three after falling way off the standards he set for himself last season with Sunderland getting relegated this time round.

Granit Xhaka arrived at Arsenal for £35m last summer, as per BBC Sport, and although we’ve seen glimpses of his quality, it hasn’t been regularly enough. Staying in north London though, it’s been even worse as far as Moussa Sissoko is concerned as his £30m arrival from Newcastle has got to be one of Tottenham’s worst bits of business in a while.

Pierre-Emile Hojbjerg has been a let-down at Southampton after joining from Bayern Munich, but in the 21-year-old’s defence, he’s still young and will surely adapt better next season if given a chance.

Moving further up the field, Riyad Mahrez has been a shadow of the player that was absolutely crucial to Leicester City’s title triumph last season, while Nolito hasn’t been able to offer the consistency that Guardiola wanted from him at City.

The less said about Simone Zaza’s stint at West Ham United the better, while even though Wayne Rooney established himself as Man Utd’s all-time record goalscorer this season, the end is surely near for the veteran in terms of his spell at Old Trafford as he has struggled to hold down a regular spot in Mourinho’s side. 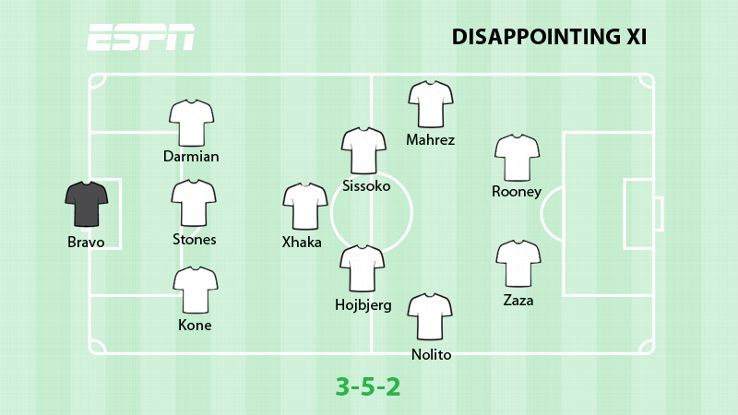