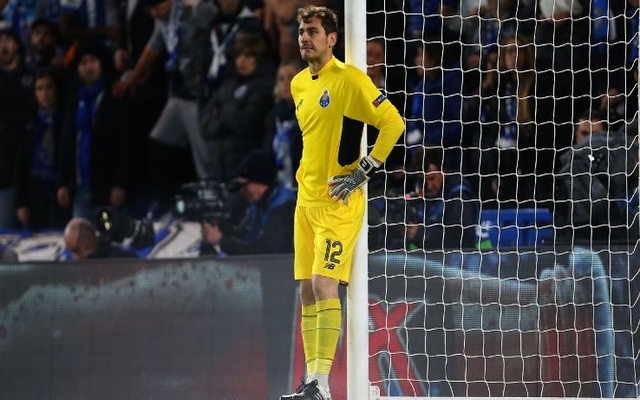 Liverpool reportedly have a pre-contract agreement in place with goalkeeper Iker Casillas as he considers his options ahead of a Porto exit this summer.

The Spanish shot-stopper turns 36 later this month, but that hasn’t stopped him from enjoying a successful season in Portugal where he conceded just 23 goals in 43 games.

However, with his two-year deal coming to an end, AS have been assessing his options and they suggest that some sources have alluded to the fact that the legendary ‘keeper may have a pre-contract in place with Liverpool over a move to Anfield ahead of next season.

It does add that Casillas himself is keen to move on, and he does reportedly have proposals from Turkey, China and Qatar if he chooses to cash in and go for a lucrative deal over playing in one of Europe’s top leagues and going for more silverware.

With Porto scheduled to return for pre-season training on July 3, he’s expected to be elsewhere by then, but it remains to be seen exactly where.

His arrival at Anfield would arguably be a sensible move from Jurgen Klopp, who has seen both Simon Mignolet and Loris Karius struggle at times with costly errors.

In turn, adding an experienced and established player like Casillas could be significant, especially as they look to make it through to the Champions League group stage later this summer.

The report doesn’t go into depth about personal terms or the length of the deal, but the general basis of it suggests that Liverpool lead the race for Casillas at this stage, but it will be down to him to decide if he fancies a move to England at this stage of his career.