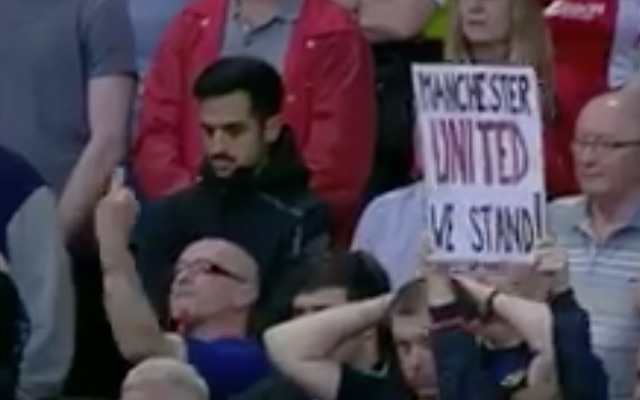 Man United fans paid tribute to the victims of the recent Manchester Arena terror attack ahead of the Europa League final on Wednesday evening.

A minute’s silence was called for at the Friends Arena in Stockholm and the majority of United and Ajax supporters observed it impeccably.

However, a handful of attendees continued to make noise, which led to a second request from the stadium announcer.

A minute’s silence, before applause at The Friends Arena as #MUFC and Ajax fans remember the victims of the Manchester attack. #UELFinal pic.twitter.com/WgpnzF2mU0

One United fan was clearly furious at the way the initial silence was ignored by some and can be seen signalling his disgust with an offensive hand gesture after 26 seconds of the above video.

Moments later, a message is delivered over the PA system asking for fans to stand and be silent.

However, United fans used this as a cue to pay respect via an alternative method.

Despite being outnumbered by Ajax supporters in the stadium, United fans belted out a deafening and defiant chorus of “Manchester, La La La”.