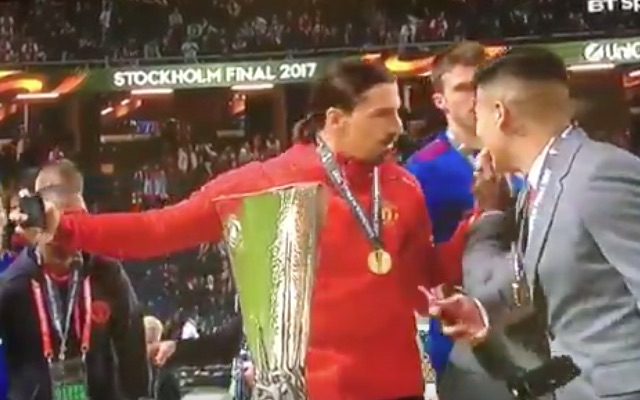 Let’s be honest, we’d all love a selfie with Zlatan Ibrahimovic.

Manchester United fans or not, we are all human and would therefore be truly humbled to share pixels with the legendary striker.

United defender Marcos Rojo is no different to you or I in that regard.

Nice to see the camaraderie at #ManUtd. How can @Ibra_official do Rojo like that ?????? #Custard pic.twitter.com/7DrOvHM9Ra

Rojo spotted Zlatan lining up for a photo on Wednesday night and tried to slide his way into the shot.

But Zlatan wasn’t having any of it as he pushed his teammate out of the way and continued pose with Eric Bailly.

Zlatan, Bailly and Rojo were all celebrating United beating Ajax 2-0 in the Europa League final, even though not of them played in the match.

Bailly missed the game through suspension, while Zlatan and Rojo are currently sidelined by injury.

Despite their squad being stretched, United cruised against Ajax, dominating possession and scoring in either half thanks to Paul Pogba and Henrikh Mkhitaryan.