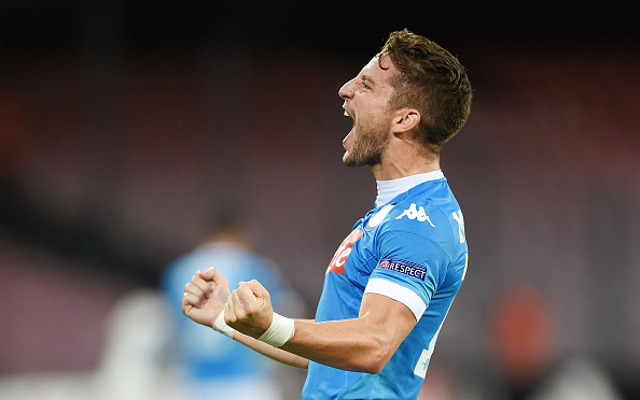 The 30-year-old is enjoying an unbelievable season in Naples with one game remaining in the Serie A campaign, scoring 33 goals and providing 15 assists in 45 appearances in all competitions.

In turn, it’s no surprise that top clubs from around Europe were taking an interest, although it looks as though they’ll all be left disappointed after both he and the club confirmed that he had inked a new deal.

As noted by The Sun, both Chelsea and Man United were credited with an interest in the Belgian international but they will be forced to look elsewhere this summer to bolster their respective attacking options.

However the report adds that Mertens has a £26.5m release clause in the deal which can be exercised in 2018, and so if he continues with his current form, there may well be interest further down the line with Napoli potentially in a difficult position to keep hold of him.

Nevertheless, for the time being the prolific forward will remain in Italy where he has been transformed by Maurizio Sarri into an out-and-out striker. The move up front has suited him as he has delivered with goals and assists on a consistent basis to help the club qualify for the Champions League, but he’ll now have a huge role to play to ensure that they can kick on next season and really challenge for trophies.