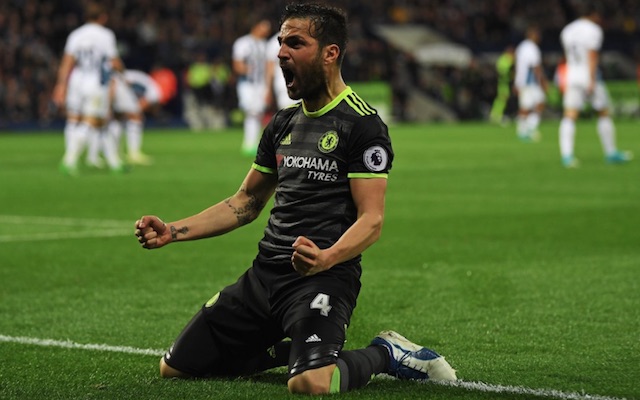 AC Milan could be given hope in their reported pursuit of Chelsea midfielder Cesc Fabregas as he refused to rule out an exit from Stamford Bridge this summer.

It comes after the Spaniard was dropped from the starting line-up by Antonio Conte for the FA Cup final against Arsenal at Wembley on Saturday.

Having struggled to establish himself in the starting XI all season, speculation of an exit has refused to go away with the Evening Standard reporting earlier this month that he would reject a £30m move to Milan.

However, his latest comments could change the situation as it doesn’t sound too promising for Chelsea, although he reiterated his ongoing commitment to the Blues at the same time and insisted that he didn’t have any issue with Conte.

“I thought I was playing very, very well in the last few months,” he is quoted as saying by The Telegraph. “That is football, you have to accept decisions.

“I have nothing against Antonio, he has done a fantastic job. Of course every player wants to play more, it is in the genes of a winner and I am one of them.

“Not necessarily [made him think about leaving], but in football you can never say never.

“Anything can happen but I have always said I feel very, very loved by the fans here and every time I have played I have shown I can play at the top level in this team. It is all about trying to change the manager’s decision.”

Fabregas started just 15 games for Chelsea all season, and ultimately for a player of his ability, as seen with his influence for Conte’s side when he does feature, he should be playing more often. Milan will give him that opportunity, but it’s obvious why he would want to stay too.

Meanwhile, as the wait goes on for Gianluigi Donnarumma to sign a contract extension, Calciomercato have compiled a list of possible targets that could replace him.

The 18-year-old’s current deal expires next summer, and there are ongoing issues between the club and his agent Mino Raiola over an extension.

Naturally, the priority is to convince him to sign a new contract, but in the event that it doesn’t go to plan, CEO Marco Fassone has spoken of having a Plan B in place, just in case.

Wojciech Szczesny, Iker Casillas and Federico Marchetti are all mentioned in the report as potential replacements, but Milan supporters will be desperate to avoid such a situation from presenting itself.