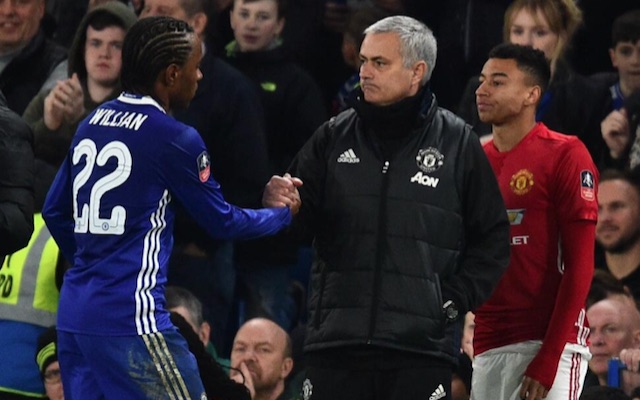 Manchester United boss Jose Mourinho is reportedly considering Chelsea ace Willian as a back-up option if he fails in his bid to sign Ivan Perisic.

The Red Devils have been heavily linked with a move for the Croatian international in recent days, with suggestions that Chelsea are also keen on the Inter star.

However, as detailed by The Independent, United are still £15m away from satisfying the Italian giants and their demands, as it’s claimed that they’ve placed an asking price of £50m on Perisic.

For a 28-year-old who hasn’t really established himself at the highest level as a player to be consistently relied upon, that’s a lot of money. There’s no doubt that he’s a talented individual who offers versatility, pace, movement and an eye for goal along with a great work ethic, but anything around £50m is surely overpaying significantly.

In turn, the report adds that Willian is the first choice as an alternative, although it’s noted that so far, the Brazilian has shown little interest in leaving Stamford Bridge where he has maintained his position as an important part of the squad under Antonio Conte.

It remains to be seen who United have more success with, but on the face of it, it sounds as though they may well have to consider other more realistic targets as it would seem difficult to prise either Perisic or Willian away from their current clubs.

Further, the note reports that all this could spell bad news for Anthony Martial who struggled to reach the same levels he showed in his first year at Man Utd, and so it’s no real surprise Mourinho is looking for another winger that fits his mould better.

Whether the Frenchman is sacrificed in order to raise further funds and make space in the squad for more of a Mourinho signing remains to be seen, but changes are more than likely at Old Trafford this summer.