We Need to Talk about John

So as John Terry strides off into the sunset from Chelsea Football Club, I want to address some of the vitriolic stuff I’ve been reading, watching, and hearing in the sporting media since his playing career with the Blues finished.

I understand fans of other teams are never going to give JT the respect he deserves, but some of the stuff I’ve seen on ‘anti’-social media, about John in recent days beggar’s belief. Worse than the keyboard warriors in their bedrooms though are the serious football journalists and pundits who write and talk about John like he is the devil incarnate. His football abilities can never be mentioned without recourse to the other ‘bad’ stuff.

I write blogs, I’m just a fan, a partisan one granted, but I don’t get the need to be so personal. The kind of abuse being heaped out seems to be reserved for Terry alone. We all know JT has had his off-field problems, he’s not alone though, so have other clubs’ legends. This is the thing that rankles with me most of all.

I don’t want to go down the route of listing the ‘rap sheets’ of this player and that, but there are endless examples of players who have done things most of us would regret. The same kind of things that John Terry has been guilty, or in some cases not guilty, of but attract nowhere near the publicity he does. Think of your club hero and his private life. If it’s been reported in the media, do you care? How relevant is it to you when he pulls on your team’s shirt?

I’ll tell you… it’s 100% irrelevant. You couldn’t care less what he’d been up to away from the football field. Chelsea fans are the same, they have always given Terry their full support, whether he’d digressed on the field of play or off it. That’s why the send-off given to him in that final home against Sunderland was so special for him and the supporters lucky enough to be in the stadium.

The furore around Terry’s substitution in the 26th minute of that game was ridiculous. There was absolutely nothing on the game, Chelsea were champions, and unfortunately for them, Sunderland were relegated. Fair play to the Black Cats though, as there had clearly been an arrangement between them and the match officials before the game to facilitate the swap with Gary Cahill. The match wasn’t being televised live in the UK so, where was the harm?

John Terry has since been quoted as saying he couldn’t care less what was being said outside of Stamford Bridge it was a personal situation between him and the fans. He’s right, I think they were all entitled to share that moment. 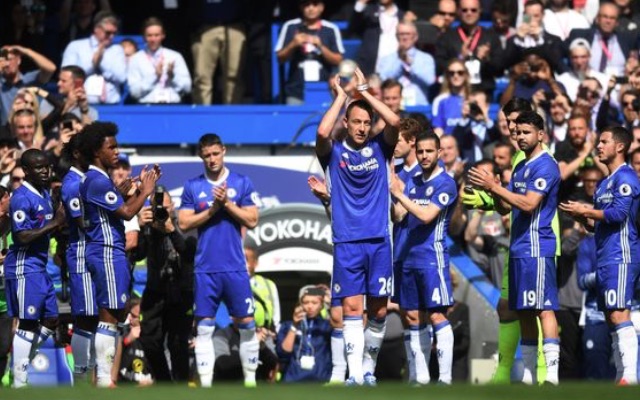 So many times, players leave clubs, particularly Chelsea, at the end of the season and are ushered out in a clandestine, underhand way. The only indication you get as fans of an imminent departure being a prolonged wave as the soon to be ‘ex’ leaves the pitch. Then you’re left guessing whether you’ll be seeing him next season or not.

I think it was entirely appropriate that JT was afforded the time to say his farewells as he wished. It could be argued that it should all have been done at the final whistle but as true Chelsea fans know that’s just not Terry’s way. We’re all made up differently. Like many others, he’s paid a fortune to kick a bag of air about. He’s had a lifetime of adoration and success. He wanted his time at his club to end in the limelight, at the centre of the stage, and to milk the applause and take one last bow, in fact his ego demanded it.

It doesn’t make him the ogre he’s portrayed as. Fans jumping on the abuse John Terry bandwagon is just about excusable, it’s tribal. Faux outrage from the press about him is not, it’s simply lazy journalism.