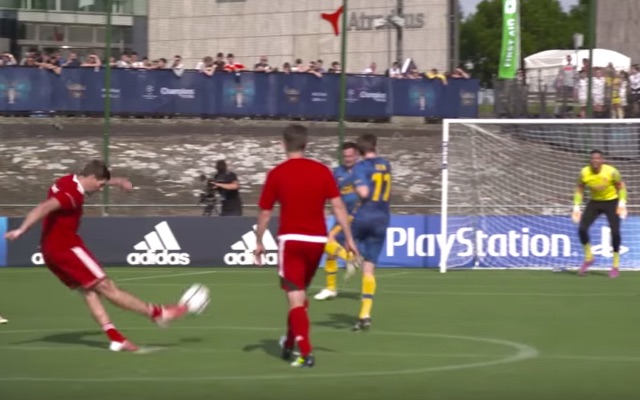 Long-range goalscoring helped Steven Gerrard become a legend for club and country during a spectacular career.

The Liverpool and England icon regularly found the top bins from outside the penalty area, but never from the halfway line.

Well, he has now! Direct from kickoff too, albeit on a much smaller pitch.

Gerrard’s screamer came in a kick-about against Hashtag United at the Champions League Final fan festival in Cardiff this week.

Gerrard played 114 times for England at senior level, but never won any silverware on the international stage.

That could change this summer, though, because Gerrard is currently preparing to lead England in a six-a-side tournament at London’s O2 Arena.

No doubt goalkeepers Pedro Contreras, Jorge Campos and Rob Douglas will be watching Gerrard right from kickoff to make sure he doesn’t replicate his recent wondergoal at the 02.