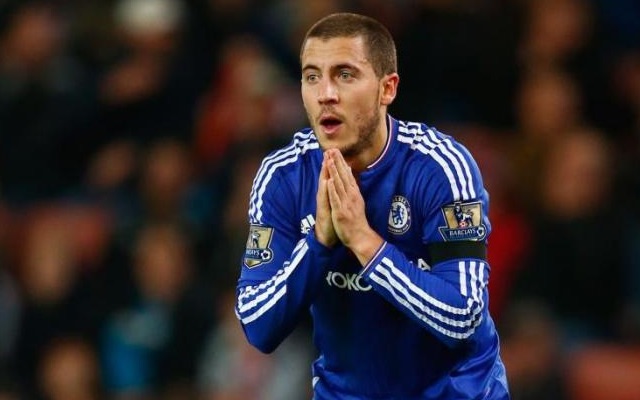 Chelsea forward Eden Hazard has admitted that although he’s happy at the club, he would consider an offer from Real Madrid if it arrived.

The 26-year-old played a key role in helping Antonio Conte’s side win the Premier League title this past year, and it looked as though everything was back on track for him to remain at Stamford Bridge and continue to be a crucial protagonist.

However, he appears to have thrown a spanner in the works and effectively welcomed an offer from Real Madrid, by revealing that he would consider it even though he’s content with life in west London.

“Of course, I would consider it if Madrid made an offer,” Hazard told reporters, as noted by FourFourTwo.

“I only know that I still have a contract with Chelsea for three seasons and that we just had an amazing 2016-17 campaign. I am feeling very well at Chelsea. But you never know what will happen.

“I have not met with the board yet to discuss a new deal. I have two games with Belgium coming up first and I am off on my holiday after that. I want to think about football as little as possible.”

It would seem like a strange time for Hazard to leave, especially after Chelsea have come so far and so quickly from their disastrous campaign before this one.

Hazard is fresh from scoring 16 goals in 36 Premier League games, Conte is expected to strengthen the squad further to ensure that they can compete in the Champions League, and all in all, things are looking good for the Blues moving forward.

Naturally, the appeal of playing for Madrid is something that can’t be replicated, and as they’ve shown again this year, they are serial winners and almost every player in the world would want to be a part of that as they will expect to continue to win trophies on a regular basis.

However, Chelsea will undoubtedly do their part in trying to persuade Hazard to stay, but time will tell what happens if the Spanish giants make their move.