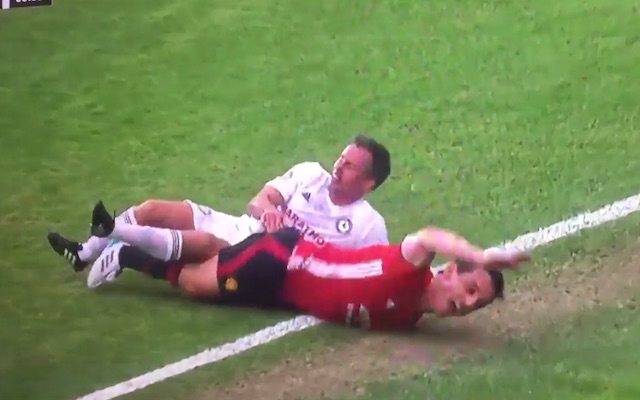 Not since Gary Neville retired from playing professionally in 2011 have he and Jamie Carragher properly gone head-to-head on the football field.

However, the former defenders have maintained their rivalry away from the pitch through their appearances on Sky Sports Monday Night Football.

The rivalry has softened with time, though.

What was once clear Manchester United vs Liverpool hatred has now become blurred to the point that it kind of seems like they almost like each other.

The pair found themselves up against each other in Michael Carrick’s testimonial on Sunday.

Carra, who has become quite the Tweeter in recent years, vowed to “snap” GNev in the build-up to the match.

Here to support Carrick & his charity but more importantly to snap @GNev2 https://t.co/9QblNfzs7n

And although he did live up to his word by nailing Neville with an awful tackle, it looked weirdly romantic.

Carra had a tough afternoon and was roasted by Ryan Giggs at one point.