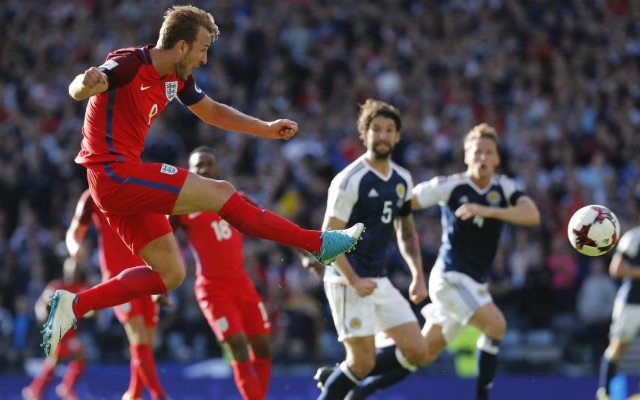 The Tottenham Hotspur striker ended his first international as skipper by volleying past Craig Gordon to earn a 2-2 draw at Hampden Park.

As Kane was celebrating his goal, a Scotland fan threw a glass whiskey bottle, which narrowly missed his head, as reported by The Sun.

There was a large police presence at Hampden, but trouble during the match was kept to a minimum for the most part.

Both sets of fans respectfully observed a minute’s silence before kick to honour the victims of the UK’s recent terror attacks.

However, as expected, Scotland fans booed throughout the British National Anthem.

England had been the better side throughout the game, but two late Leigh Griffiths free kicks put Scotland on course for a shock victory, before Kane intervened.

Speaking after the final whistle, Kane suggested that he and his team were content with the outcome of the match, which leaves England three points clear at the top of their World Cup qualifying group.

“After that we are relatively happy with the draw,” Kane told Sky Sports.

“It was a crazy end to the game and that’s international football for you. To go 2-1 behind out of the blue like that with two special free-kicks from Griffiths, it was unbelievable character to come back a get a point.

“It still leaves us top and in a good position because qualifying is all that matters.”