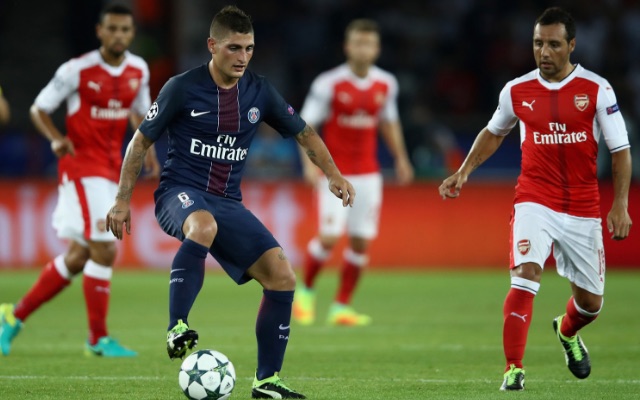 Barcelona will reportedly launch a €100m bid for Paris Saint-Germain midfielder Marco Verratti, with the Italian wanting to leave the French capital.

Over the weekend, The Sun reported that Barcelona were preparing the sensational offer, but there were still reservations over whether or not the Catalan giants had the money to launch such a move.

It seems as though they do, as reports around Europe are echoing the same figures and transfer, with La Gazzetta dello Sport reporting that Barca will make a €100m offer, while the contract offer on the table is said to be worth €10m-a-year.

The report reiterates that Verratti wants to leave PSG, but ultimately the French giants don’t want to let the 24-year-old depart, which is to be expected given his quality and importance to the team.

However, with meetings taking place between his agent Donato Di Campli and PSG sporting director Antero Henrique on Monday, it’s expected that the situation will be resolved one way or another.

In addition, it’s claimed that Chelsea and Bayern Munich are also interested, but there’s no suggestion that they’re ready to match the figures being touted from Barcelona.

Verratti has shown for both club and country how much quality he can bring to a side in his deep-lying midfield playmaker role, but that is still a lot of money for him.

Barca’s need is clear as they look to bolster new coach Ernesto Valverde’s squad and they must start bringing in long-term replacements in midfield, while Chelsea and Bayern will be looking to strengthen in order to continue their domestic success, but also to make an impression in Europe.

Carlo Ancelotti will obviously know Verratti well from their days together in Paris, and so it remains to be seen which offer the Italian international prefers, if he is indeed to leave PSG.