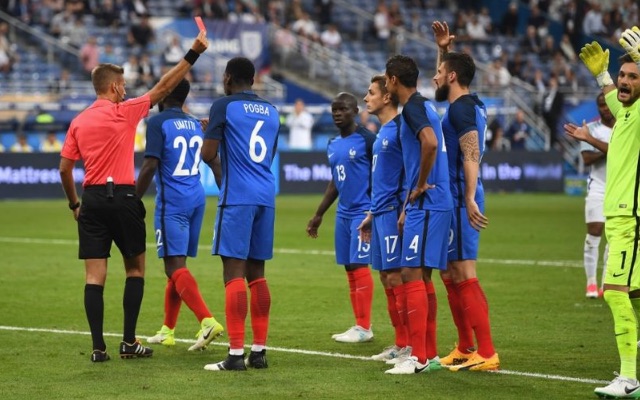 Move aside, vanishing spray, there’s a new kid on the block!

England fans were treated to VAR (Video Assistant Referee) for the first time on Tuesday night and it was bloody exciting.

France defender Raphael Varane brought down Dele Alli in the penalty area early in the second half, the referee (the chief Muggle official without any magical powers) pointed to the spot, but then we waited.

We waited for 34 seconds while some footage was reviewed by a secret wizard who ultimately decided that Varane deserved to be sent off.

Varane’s red card came as it was judged that he had not made a genuine attempt to dispossess Alli fairly.

Harry Kane slammed home the resultant penalty to make it 2-2, giving England the best part of 45 minutes to find a winner.

However, it was France who secured victory – deservedly so – thanks to a 78th-minute strike from Ousmane Dembele.

SEE MORE:
£272.4m England duo worth more than Lionel Messi and Cristiano Ronaldo
(Watch) Theresa May pictured at England vs France looking like every PL fan feels
Arsenal miss out as PL rivals swoop in to agree £30m fee for England U21 ace