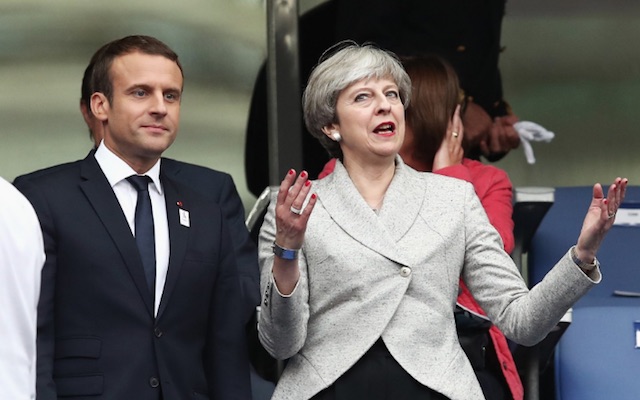 Theresa May has got a lot on her plate right now – what with her snap election fail leaving her and her government in total chaos.

But everyone deserves a night out, yeah?

Mrs May spent her Tuesday evening in Paris watching the international friendly between France and England.

Theresa May hates international football as much as everyone else. Let's get a hard Brexit and just play PL 365!???pic.twitter.com/Wwg3Mtl5bK

And as the TV camera panned her way when the teams walked out onto the pitch, she looked totally bored.

Who can blame her, though?

None of us really enjoy international football, especially friendlies.

These games are merely the methadone to keep us functioning when the Premier League is taken away for the summer.

May is due to begin Brexit talks next week.

She is expected to go down the “hard Brexit” route, whatever the f*** that means…

Hopefully it means no more international friendlies and 12 months of proper English football!