You can’t win the Premier League in August, so the old saying goes, but you can certainly go a long way to losing it!

A solid start to the season can be vital for those teams with title aspirations, especially at a time when as many as six teams all have genuine hopes of finishing top.

The 2017-18 Premier League fixtures were released this morning and we have taken it upon ourselves to predict the results of all the early matches involving the Big Six.

Should our predictions, which you can check out below, come true, then the top of the Premier League table should look something like this come the end of August.

Man City to top the three going into September? We reckon so, but what do you think?

Predictions behind the predicted table…

All the top six will fancy their chances of winning on the opening day, with Spurs especially motivated after losing 5-1 at Newcastle in May 2016. Tottenham should be extra sharp with this in mind.

Liverpool are the top-six side who are most likely to drop opening-day points. The Reds have been thoroughly unconvincing in their last two trips to Watford, losing 3-0 at Vicarage Road in December 2015, before sneaking a scrappy 1-0 win their last month when they relied upon a freakish Emre Can wondergoal. 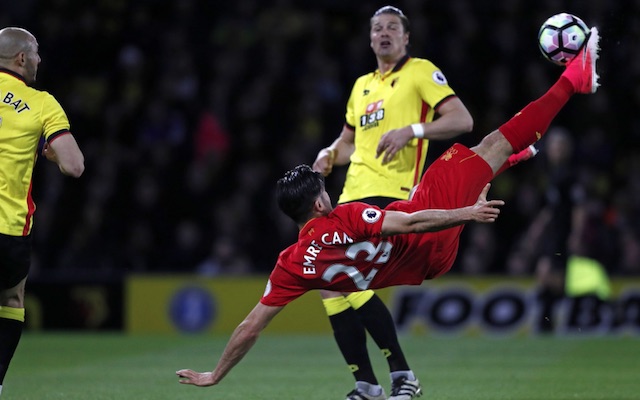 Arsenal hate Stoke away, so this could well be their first slip of the season.

Meanwhile, Spurs will have been hoping for an easy start at Wembley to help them settle in… They didn’t get it! Chelsea love playing Tottenham at Wembley, having beating their rivals 4-2, 2-0 and 5-1 in their last three meetings at the national stadium.

Everton could well hold Chelsea, but Man City should claim another win, while Liverpool are at their most comfortable when playing bigger sides, especially Arsenal, having put seven goals past the Gunners last season.

Spurs will be very happy to welcome Burnley, who had the worst away record in last season’s Prem.